The New Poster for Boar is a Scream 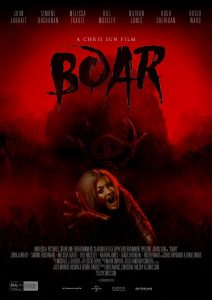 A new poster has been unveiled for Chris Sun’s (Charlie’s Farm) Aussie horror Boar and it’s a scream, teasing the huge beast and its bloody reign of terror. The film’s plot is short and sweet, following a rampaging boar as it tears through an Australian town.

Synopsis:
Lurking within this picturesque setting is a dark and terrifying threat – a beast of staggering size with an uncontrollable desire for blood and destruction. Driven by its insatiable appetite for carnage, it defends its territory with brutal force and savagely takes on any who get in its way.

If you’re keen to see more from the film – and we know you are! – check out the bloody, brutal trailer for a taste of the monstrous action below.

Boar has a release date slated for 2018.