Writer-director Buddy Cooper is bringing us a decades-later sequel to his 1984 slasher movie The Mutilator—and the official poster suggests this one is going to be just as brutal as its predecessor! 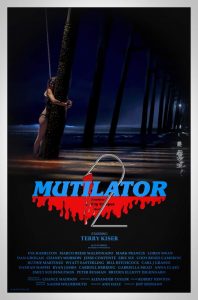 Excitingly, Alexander Taylor recently signed on to score the film. Taylor created the fantastic score for Scream, Queen! My Nightmare on Elm Street.

In The Mutilator: “A college student, who accidentally killed his mother as a child, decides to take his friends to his father’s fishing cabin during fall break, not knowing that his crazed father is stalking the place.”

Filming on The Mutilator 2 wrapped earlier this year.