THE MUNSTERS WRAPS FILMING AND GETS POSTER

Rob Zombie’s The Munsters has officially wrapped filming! Zombie announced the news on Instagram, bidding farewell to Budapest where production was based and sharing some fresh behind-the-scenes images of the core cast that give us a closer look at the costumes and makeup. 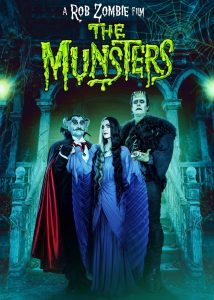 We still don’t have a release date for The Munsters just yet, but we do have the first official poster! The poster is suitably spooky, highlighting Sheri Moon Zombie’s Lily Munster, Jeff Daniel Phillips’ Herman Munster, and Daniel Roebuck’s Grandpa Munster standing outside the iconic edifice of 1313 Mockingbird Lane.