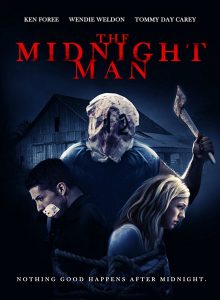 A couple retreat to a quiet cabin to help re-build their failing marriage, but their peace and quiet is soon threatened by a mysterious stranger.

The Midnight Man is a clichéd and unbalanced thriller that treads an all-too-familiar path. It fails to offer anything we’ve not seen before countless times, offers awkward humour the film could have done without and treads its predictable tale safely and unsurprisingly.

I really do try to look for the good in every film that I watch, but The Midnight Man is one of those films where it is almost impossible to do so. It’s unfunny, un-scary and a slog to get through. The runtime is only around 85 minutes, but it feels double that. It’s painfully slow, features a pointless turn of events – the film’s only surprise comes around the half-way mark and it’s a mediocre one at that – and eventually nonsensical. You’ll be left scratching your head, wondering what exactly happened and wishing it was possible to get those wasted minutes back.

The film’s first error is to have such a completely unlikeable couple at its centre. If we’re to root for these two and hope they sort out their issues, then it’s an immediate mistake to present them as so detestable. Jessica (Wendie Weldon) is loud and demeaning, plus despite wearing a plastered smile across her face for the majority of the film, comes across as miserable. Whether that’s her in character or her true feelings about the film coming through, is up for debate. Jessica’s husband Kyle (Tommy Day Carey) is a sarcastic, hypocritical and closed-minded fool, who scolds his wife for spending $500 on a purse (because that’s what women love to do – shop!) while he’s hiding a huge build-up of gambling debt. The pair go together like chalk and cheese, but you can guess by the end they’ll be love’s young dream.

The Midnight Man juggles too many ideas, failing to deliver on any and tries to preach a story about coming together in times of crisis. I suppose it’s meant to be uplifting to see the pair trying to work out their differences, but I couldn’t help but think they should just cut their losses and run as far away from each other as possible.

In terms of scares, The Midnight Man is criminally light. This comes with the film’s case of a fractured identity, where it fails to choose whether it’s a straight-up horror film or a tongue-in-cheek horror-comedy. In the end it becomes neither, because it’s too dull to be scary and too stupid to be funny. The Midnight Man himself is basically a no-show, having been resorted to a short moment of bad sound effects, bad make-up and a hearty dose of shaky cam to put the cherry on the cake of mediocrity.

The film’s one saving grace is the appearance of Ken Foree, who becomes an injection of much-needed wit and menace. He clearly loved every minute of playing the sinister role of Hamilton, who comes to collect the money owed by Kyle and threatens to cut off his little toe. He is a breath of professional air in a film that is otherwise amateurish. 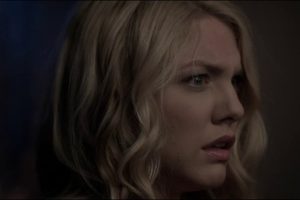 The Midnight Man gets a thumbs-down from me, but those who enjoy stereotypical characters doing very little other than tediously argue, humour that misses every mark and a disappointing lack of scares in their horror films, will find a lot to praise. Everyone else, give this one a miss.