THE MIDNIGHT CLUB GETTING A NETFLIX SERIES

Mike Flanagan (Doctor Sleep, The Haunting of Hill House) and Leah Fong (The Magicians, Once Upon a Time) are turning Christopher Pike’s The Midnight Club into a Netflix series. 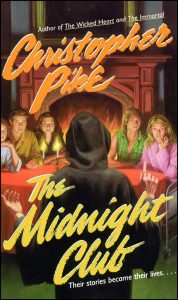 The young adult horror novel, which was first published in 1994, is set at a hospice for terminally ill teenagers. Five patients who meet at midnight to tell creepy stories eventually form an unsettling pact: the first to die must attempt to contact the others from beyond the grave.

Flanagan and Fong will also serve as executive producers alongside Julia Bicknell and Trevor Macy. Elan Gale, James Flanagan, and Chinaka Hodge are among the writers currently attached to the series, which will supposedly draw on Pike’s other work as well.