THE MAN WHO COULD CHEAT DEATH: Film Review 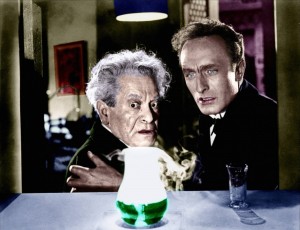 Synopsis:
Doctor and sculptor Georges Bonnet has found the secret of eternal youth. Every ten years he undergoes a gland transplant operation conducted by his friend, renowned doctor Ludwig Weiss, but Weiss has suffered a stroke and can no longer operate. Time runs short for Bonnet, who must persuade another surgeon to perform the transplant before his years catch up with him.

Set in Paris in 1890 (when the city’s residents apparently all spoke the Queen’s English), The Man Who Could Cheat Death is not one of Hammer Studios’ more celebrated works. Released in 1959, it lacks the Technicolor lavishness of 1957’s The Curse of Frankenstein and its 1958 sequel, and the monstrous energy of Dracula (1958), but is certainly not without its rickety Gothic charm. It’s got a stuffy and reserved feel, but the unrelentingly haughty dialogue (often belonging to Christopher Lee, as Dr. Pierre Gerrard) provides some fun. “I suppose I should be annoyed at this verbal subterfuge”, Gerrard exclaims upon realising that Weiss is not talking hypothetically when explaining the operation to him. “I don’t know why I’m not, really.”

Sparse use of music gives the film that quiet calm common to much of Hammer’s ‘lesser’ output that ensures every footfall and ruffle of clothing is heard. The effect is that the film seems somewhat lifeless, but the bigger problem contributing to this feel is the lack of set pieces. Until the brilliantly macabre (if all-too-brief) finale, there is only really one moment of horror in which one of Bonnet’s models treads a little too close to his secret and pays the price. He is overdue his operation but can sustain his youth temporarily by drinking a green elixir every six hours and the model gets a glimpse of what happens when he is late taking this medicine. Bonnet’s regular trips to the safe in which the elixir is stored are the closest the film gets to the colourful expressionism of Hammer’s Frankenstein classics, with a green light filling the safe. It’s a fun repeated image – Bonnet’s face bathed in green as he peers into the safe containing the smoking flask of green liquid.

Director Terence Fisher made The Man Who Could Cheat Death during a period filled with some of his biggest Hammer hits. Released two years after both Dracula and The Revenge of Frankenstein and in the same year as The Mummy, the film fell short of Fisher’s better work, and the reason is easily identifiable. Originally set to play the lead, Peter Cushing pulled out, citing exhaustion (although the cause was more likely his dislike of Fisher’s regular screenwriter Jimmy Sangster, whose dialogue he would routinely alter), and his absence is sorely felt. A TV regular at the time, Anton Diffring does a passable job as Georges Bonnet and his tight lipped, clipped diction suits the Hammer style, but he’s not entirely engaging as a lead. It’s a shame that Christopher Lee wasn’t given the role following Cushing’s departure, as his character doesn’t really allow him off the leash.

Eureka’s DVD contains an informative interview with the ever-insightful Kim Newman, and one with Jonathan Rigby, which in truth threatens to cause narcolepsy. While missing the ingredients that make up any of Hammer’s true classics, The Man Who Could Cheat Death is still identifiably the work of the studio, and is far from their bottom end in terms of quality. There’s fun to be had with this creaky entry in the Hammer canon and though it may not quite hit the mark, it is of great value to fans that may have previously let it slip them by.