THE MAGIC ZOMBIE! GLASS RAISES THE DEAD WITH A COCKTAIL 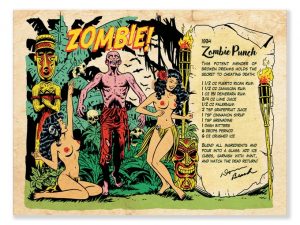 Hollywood, CA – Southern California-based artist and writer Will Penny is excited to announce his “Magic ZOMBIE! Glass” — a mystical drinking vessel that turns a regular tiki cocktail into a potent voodoo potion.  By simply pouring a cold beverage into the glass, a zombie magically appears.

Penny is seeking to fund his offbeat concept through a Kickstarter campaign, from June 1st through the 30th.  At the time of this report, the campaign has already hit 200% of the initial funding goal.  “I’m pretty excited to see such enthusiasm for the glass,” Penny says.  “I think it’s going to be a really fun product for people to use and display in their home tiki bars.”

The glass is inspired by Donn Beach, the father of tiki culture and inventor of the Zombie cocktail.  However, Donn didn’t serve his Zombie in a tiki mug – instead he presented his so-called “mender of broken dreams” in a tall, chimney-style glass. 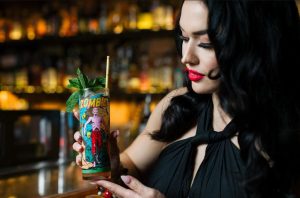 The “Magic ZOMBIE! Glass” is exclusively available on Kickstarter through the end of this month.

Every pre-order placed through the campaign will receive the magic glass, special limited artwork, and original exotica music – everything necessary to throw your own haunted luau this summer.