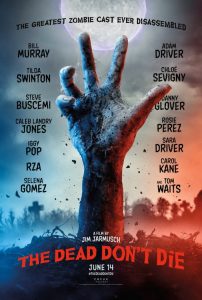 It claims to feature “the greatest zombie cast ever disassembled,” and so far, we’re inclined to agree. Hype has been steadily building for The Dead Don’t Die, a zombie film from director Jim Jarmusch (Only Lovers Left Alive)—and with the release of the first trailer, it looks like we’re in for a gut-busting good time.

The film stars Bill Murray (Ghostbusters), Chloë Sevigny (American Psycho), and Adam Driver (Star Wars: The Force Awakens) as three local cops working in a quiet town that becomes overrun by zombies. And not just any zombies—these zombies seem drawn to things they loved in life. Oh, and one of them is Iggy Pop. So that’s neat.

From the trailer, The Dead Don’t Die promises guts, gore, and laughs aplenty. And with such an amazing cast (did we mention Tilda Swinton, Steve Buschemi, and Danny Glover?), we can’t wait to see what Jarmusch has up his sleeve.

The Dead Don’t Die is slated for a June 14th release. Check out the trailer from Focus Features below, and let us know what you think.