THE LIBRARY OF THE DEAD: Book Review 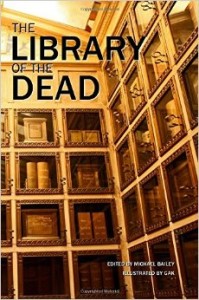 The Library of the Dead is an anthology edited by Michael Bailey and containing one of the last stories written by the late JF Gonzalez. There are fifteen stories by various authors including Brian Keene, Kealan Patrick Burke, Michael McBride, Christopher Golden, Tim Lebbon, Gary Braunbeck and an afterword remembrance by Mary Sangiovanni with an introduction by Norman Partridge. There is also some fantastically dark and elaborate artwork by Gak.

The Chapel of the Chimes or the Library of the Dead stands in Oakland, California and is for all intents and purposes a mausoleum. The many golden tome like cinerarium urns contain the entombed ashes of many different and fascinating people. Thousands of golden books each with a story to tell and of course, our authors tell only the scariest and most disturbing of tales from the darkness of night and the deepest most distressing of dreams.

We start off with the story of a killer looking for fame and a bystander with something to prove, visions of heroism. Those Who Shall Never Be Named by Yvonne Navarro starts the anthology on a resounding high note and finds our hero following the killer to Mountain View Cemetery. Both prepared for a fatal confrontation but unbeknownst to killer and hero their futures already decided when they stepped into the Library.

Other highlights include The Last Things To Go by Mary Sangiovanni & Brian Keene, a story about a woman in mourning, but have desire and delusion clouded her memory and driven her crazy. Kealan Patrick Burke also explores insanity in I’m Not There, the story of a man who can’t see his own reflection and JF Gonzalez tells of nightmarish stalker in I’m Getting Closer.

Michael McBride tells a tale from the Chapel of the Chimes itself and an old man’s funeral, where deceit, murder and a lie that started many years ago are finally laid bare. In Night Soliloqoy, Sydney Leigh’s story is of the love Freddy had for his wife Fern and the strange tragedy that laid her in the Chapel, of a beautiful Artley Flute that he bought for her and the screams that followed.

These stories come from hope, they come from forgiveness, from redemption and loss, and there is a Chapel for them all. What the Library of The Dead shows is the astounding power and emotion that can be created from a short story and why horror is it’s perfect medium, every story is compelling and I couldn’t think of one that didn’t touch me in some way. Right up to the beautiful remembrance afterword for Jesus Gonzalez and I recommend The Library of The Dead, not just for it’s beautiful stories but also for the wonderful illustrations. Buy it, you won’t be disappointed.