Synopsis:
A teacher’s rage is felt when he abducts two students who have been making his life in the classroom a living hell. 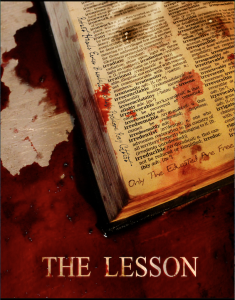 We all remember sitting in a classroom – probably wishing we were elsewhere – and watching a particular teacher go through hell and back every day. There’s always one who gets the brunt a little harsher than the others and falls victim to the torments of the teenagers they are trying so courageously to teach. Some students are a lost cause; destined to be forever uninterested in the lessons they are being forced to attend. Others, however, need nothing more than a kick up the behind to get their minds in to gear and that’s the lesson in Platt’s unrelenting and shamelessly entertaining tale of revenge.
I’m a sucker for a good old-fashioned revenge flick. From the Korean masterpiece I Saw The Devil, to the blood-splattery Kill Bill and even the silly Law Abiding Citizen, I do enjoy seeing bad things happen to bad people. The Lesson is another film that shows someone at the end of their tether and wreaking the ultimate retaliation by giving two kids a taste of their own medicine. OK, so they didn’t exactly threaten to nail their teacher’s hand to a table, but you get what I mean. They are a couple of jerks who have been teasing their teacher Mr Gale for far too long and in a highly illegal, but completely understandable fashion, he abducts them, ties them to a chair and gives them an English lesson they, and we, are never going to forget.

The beginning of the Lesson sets the scene for the future pain by giving us a brief, but insightful, look at the two boys who are going to feel their teacher’s wrath. Rather than painting an entirely negative portrait of the two boys Fin(Evan Bendall) and Joel (Rory Coltart) that are set to be mentally and physically tortured, we get a painting of two sides. On the one hand, they are complete bastards who key cars, hurl abuse and sit around drinking cider in the park. On the other hand, we are provided with a reason for their asinine behaviour and actually feel a tiny bit sorry for Fin in particular.  Fin lives with his older brother Jake who is, also, a moron. Jake treats his little brother like dirt on his shoe; showing him no love or respect and, therefore, encouraging us to understand why Fin struggles to show any of these feelings in return. Sentimental music and lingering camera shots on Fin emphasise the empathy we are supposed to feel and just like Mr Gale’s demand that his students put themselves in other people’s shoes, we are goaded to do the same. This complex exploration of Fin’s personality prevents us, from fully enjoying the pain Mr Gale enforces. In the back of our minds we feel sorry for Fin, but does a poor upbringing excuse the poor treatment of a teacher? Of course bloody not. Continue with the nail gun, Mr Gale. 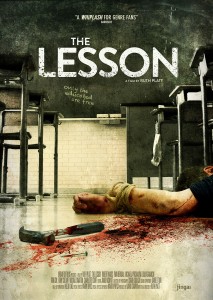 If you’re keen to see the scale of torture that The Lesson has to offer then you may be a little disappointed. Platt’s film is more concerned with psychological pain rather than physical. That’s not to say The Lesson is easy on the torturous bloodshed, because it’s not. There are some strikingly painful shots involving nails, hands and more nails, with The Lesson eventually reaching a satisfyingly blood-soaked climax. As Mr Gale, Robert Hands (that name is far too perfect for this film) presents a great look at a man who has, quite simply, had enough. He’s equally as intelligent as he is psychotic and puts those to traits together perfectly when he plays a devilish game of, I like to call, “10 seconds of word-hunting hell” – I know, it could use some improvement.  In the game, the boys are given 10 seconds to find a word in the dictionary or they get a nail in the hand. Rather than purely physically tormenting the boys by chopping off their fingers, electrocuting them or sticking pins in their eyes, Mr Gale engages in a far smarter mode of revenge. He legitimately teaches them. He puts their memories to the test as he bombards them with knowledge about Lord of the Flies, Paradise Lost, Jean-Jacques Rousseau, William Blake, Charles Dickens and Thomas Hobbes. By the end of this very special lesson they’re either going to be teen geniuses or, well, dead. A great element of The Lesson is never fully knowing what’s going to happen, because none of these people truly deserve their happy ending.

There are a couple of sub-stories within The Lesson that attempt to elevate the film from being more than just a torture flick, but their overall lack of exploration prevents them from having this desired effect. The relationship between Fin and his brother is only briefly touched upon and there’s an even briefer look at the life of Jake’s girlfriend. They both had the potential to be interesting narrative strands, but the overall lack of attention on them restricted their ability to add  an extra layer of depth. It is a commendable decision to try and add more complexities to the film, but I would argue that plenty is accomplished within the main plot, anyway. The lesson’s teachings are plain and simple and that’s perfectly fine. To remind your audience to think before you act and show some damn respect to those that deserve it, but also, to remember that there’s always more going on below the surface, is an admirable force to drive the film with. What The Lesson could have done, perhaps, is delved in to the personal life of Mr Gale; it would have served the film well to give us a further look in to his mindset or suggested that it was more than just a couple of irritating kids that pushed him over the edge. 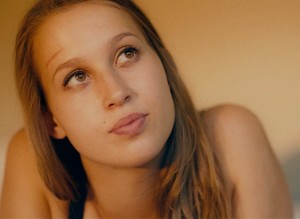 Ruth Platt’s tale of revenge is familiar at its core, but the unique choice of revenge undertaken by Mr Gale sets The Lesson up as a refreshing, shocking and brutal little story of payback. Despite never fully exploring a couple of sub-plots which the film could have done without, The Lesson is a horror tale that will linger with it’s fearless lasting impression. Now, “Find a Word or Get Nailed” – that’s a better title, right?