The Latest Annabelle Sequel Gets a Name, and She’s Coming Home 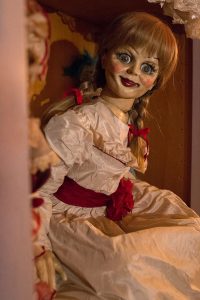 So far, The Conjuring franchise’s extended universe hasn’t been nearly as interesting or noteworthy as the core films that tie them all together. But that may change with the next installment in the Annabelle saga thanks to the return of Patrick Wilson and Vera Farmiga, arguably the best parts of the entire franchise. The pair will reprise their roles as paranormal investigators Ed and Lorraine Warren in the new film, which Warner Bros. have revealed will be called Annabelle Comes Home.

The title was announced in a short teaser video from the studio. Inspired by the story of the real-life Annabelle (a Raggedy Ann doll said to be possessed by an inhuman spirit), the film will see the Warrens taking the demonic doll back to the Artifacts Room of their home in the hope that they can curb her bad behavior. But if we know Annabelle, she won’t let a glass case keep her down—and a room full of evil artifacts may be just what she needs to wreak more havoc than ever.

Annabelle Comes Home will be the third installment in the Annabelle solo franchise and the sixth in The Conjuring universe overall. The film is the directorial debut of Gary Dauberman, who penned the previous Annabelle movies, along with The Nun and both chapters of the new IT franchise. McKenna Grace (The Haunting of Hill House) replaces Sterling Jerins in the role of the Warrens’ daughter, Judy.