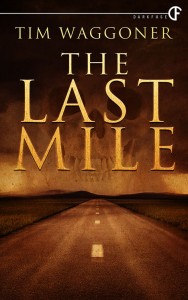 The Last Mile is a post-apocalyptic novella in a time called The World After, Dan is a thrall to his master and is in the process of delivering a female sacrifice, when disaster strikes. We then go back in time to explore the initial outbreak or attack, from both parties point of view, while at the same time travelling that last mile to the Masters Lair.

The story sort of peaked my curiosity a little but left a lot of questions unanswered, I thought it required a longer piece of work to fully engage this new world, not just the sky opening up with a million eyes gazing down with alien hunger.

All wildlife dies, the sky rained dead birds and we’re left with something along the lines of mutated animals adapted for survival in the harshest environment, every creature is now a predator and they don’t give up.

Even the plants are predators, the only example being the thorn-stalk that grows through the asphalt, something along the lines of Day of the Triffids on a smaller scale, a vicious little bastard that has the intelligence to ignore the thrall mark, mostly anyway.

Some parts were hard to take, others I enjoyed, the role of the captive Alice was the best part of the story and was a stark reminder that no one is innocent in this world.