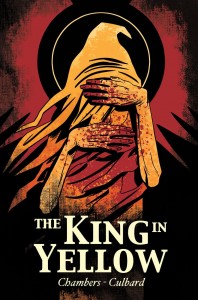 The King in Yellow, a series of interconnecting short stories about a play that drives people mad, was first published in 1895 by American author Robert W. Chambers. Despite being featured in the first season of HBO’s True Detective, the book has fallen into a state of relative obscurity, leaving Chambers overshadowed by other writers of “weird fiction,” such as Lovecraft, Poe and Arthur Machen. I.N.J Culbard’s adaptation for Self Made Hero is an admirable retelling but, unfortunately, one that only partly works.

The biggest fault lies with the source material. Chamber’s story, which is dense and esoteric, doesn’t really lend itself to a visual medium. For the same reason that Wilde’s Dorian Gray has never successfully worked on film, the power of the story comes from the fact that key moments are left to the reader’s imagination. The cloaked king – a figure so terrible that those who see him are driven mad – doesn’t seem quite so frightening when rendered in Culbard’s animated style. This is a real shame, as Culbard’s art is both dramatic and 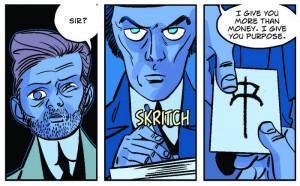 expressive, particularly in the quieter, more character-driven moments. Eyes and faces often reveal hidden layers of emotion, and silent pages in which time passes prove incredibly masterful. Colour is also deftly employed, with splashes of bright, dizzying blood, and shadows of a rich, inky black. The night scenes, in which characters are lit by a wan, gelid moon, give the book a delightfully ambiguous atmosphere.

Chamber’s prose, which is often thick and impenetrable, has been admirably adapted by Culbard, combining a nineteenth century aesthetic with a modern accessibility. The book may have benefitted from the addition of extra pages, as the complex story is not incredibly easy to follow. Character’s histories and relationships are not always clearly established, and previous knowledge of Chamber’s work might make the book a little easier to enjoy. 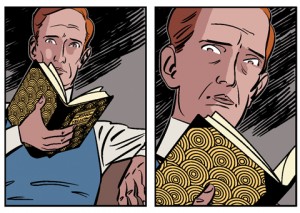 But in spite of this, The King in Yellow does possess a strange, dream-like quality, and I found myself haunted by some of the imagery for a long time after I had finished. The final few pages (and the very last line of dialogue) make for a powerful denouement, even though it’s hardly conclusive or satisfying. It made me want to revisit some of the great examples of weird fiction, which is a testament to the strength of Culbard’s vision – even if it’s one far easier to admire than it is to love.