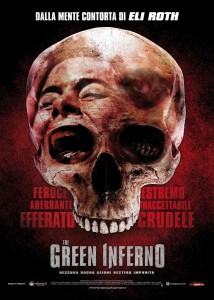 It cannot be denied that Eli Roth’s The Green Inferno owes a lot to films like Cannibal Holocaust, which is directed by the Italian Ruggero Deodato. So it is unsurprising to see the film receive an Italian one-sheet, which shows the film paying homage to the features that came before it. You can check out the trailer below, too.

Synopsis:
The Green Inferno follows a group of student activists who from New York City travel to the Amazon to protect a dying tribe, but crash in the jungle and are taken hostage by the very natives they saved. Dark and primitive customs still rule the Amazon jungle: cannibalism and other mind, body and soul-destroying rituals. Trapped in the village, these high-tech modern-world students experience the ultimate in primal barbaric terror, suffering unspeakable acts of violence in an intense and chilling rituals reserved only for the most threatening intruders.

Hopefully The Green Inferno will be something we can get our teeth in to, be sure to catch it when it arrives in US cinemas on 25th September 2015. Keep your eyes peeled for that UK release date we’re all craving.