The Human Centipede: The Full Sequence is Crawling to Blu-ray 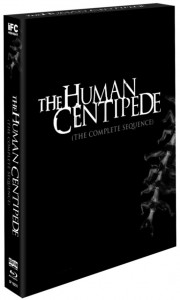 With Christmas just around the corner, I know that a lot of you will be adding this to the very tops of your lists. The Human Centipede trilogy is getting a 3-disc box set release packed with deleted scenes, extras and interviews galore. For die-hard Human Centipede fans, this is surely a like an act of God?
The full list of features are as follows:

I really can’t wait to see more skin-crawling action from The Human Centipede, I can’t imagine what they deemed unworthy for the film. It will also be interesting to see the second film in colour, I wonder if it will heighten the horror…

Be sure to purchase your copy of The Human Centipede: The Full Sequence when it is released on 27th October 2015. Sadly, this is only for those in the USA, so keep your eyes peeled for a European release!