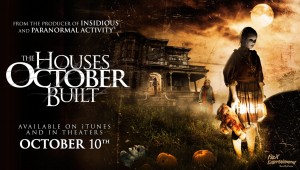 Synopsis:
Looking to find an authentic, blood-curdling good fright for Halloween, five friends set off on a road trip in an RV to track down these underground Haunts. Just when their search seems to reach a dead end, strange and disturbing things start happening and it becomes clear that the Haunt has come to them.

Attractions, particularly of the haunted kind, are not unfamiliar in cinema. What’s not to love about Roger Moore’s predicament as he fumbled his way around Scaramanga’s labyrinthine maze with Nick Nack on the loose? Most recently Adam Wingard headed over to the haunted maze at McCall’s Haunted Farm to shoot scenes for his most recent outing, The Guest. With these haunted attractions making the perfect stomping ground for genre films it is bemusing that no one has really dug beneath the surface to unearth what really goes down at these haunts. This is where writer/director/protagonist Bobby Roe’s feature debut, The Houses October Built comes in. Roe’s film is here to provide a revelatory look into the haunted attraction business and some of the urban legends surrounding it.

Set up with a documentary premise, five filmmakers, played by themselves (Bobby Roe, Zack Andrews [co-writer], Mikey Roe, Jeff Larson and Brandy Schaefer) decide to rent an RV and head off to visit as many haunted attractions as is humanly possible in search of the ‘ultimate scare’. Why? Well rumour would have it that some of these attractions are a lot seedier than people would have you believe; ex-convicts working as scare actors, real body parts used as props…

So the party-of-five ferret out haunts-a-plenty whilst conducting various Borat-esque interviews with all manner of scare actors and amusement operators. The interviews come across as the genuine article as I am of the understanding most were performed sans script. That said, it’s not long before the documentary crews’ questions and actions start to tick a few of the locals off. Without giving too much away their investigations eventually lead them to an ultimate underground haunt going by the name of the Blue Skeleton.

99% of the kudos has to go to the camera crew for the scenes shot inside the haunts. I’m sure many will have seen a POV video for a theme park attraction on YouTube so I don’t need to tell you how lacklustre most of those videos are compared to experiencing the real thing. Case in point, The Houses October Built does an extraordinary job of capturing the real tension and claustrophobia these attractions often radiate and the film serves up just as many jolts in the cinema as it does on screen as Brandy fumbles around in pitch dark. I’m sure Mr. Roe and the rest of the crew were content for deciding not to let Brandy go on the attractions prior to shooting the film. Not so sure Brandy will have felt the same way but it’s this technique that makes The Houses October Built a must see this Halloween as it doles out the ideal mix of entertainment and scares for the season.

The motivation that set this documentary in motion was a desire to discover the most extreme haunt possible and they achieve their goal when the Blue Skeleton rears its ugly head. It pains me to say this but it is at this point that the film takes an unexpected wrong turn. After over 60 minutes of sheer fun and fear the film starts to flounder. Obviously everyone has their own perceptions of “extreme” fear but when the crew meets its comeuppance we’ve already been treated to so many effective scares along the way that the film has raised our expectations maybe more than it should have. The camera work and angles used in the final scenes add salt to this would and at times it is unclear what is actually going on. Accordingly, the depredations of the Blue Skeleton never really manage to find the power to shock and it left a bitter taste in my mouth.

That said, I urge you to watch The Houses October Built this Halloween for one reason and one reason alone. The filmmakers clearly had one objective in mind; to entertain and scare, and they hit that nail firmly on the head. Add this guilty pleasure to your Halloween celebrations if you dare.