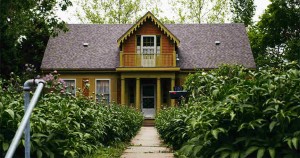 Synopsis:
A psychological horror about a young woman coping with an unwanted pregnancy after moving into a seemingly haunted house.

You’d think that two twin brothers born and raised in a purportedly haunted house would choose to do anything but write and direct a film about a ….. haunted house. Mind you, the recently released It Follows found writer/director David Robert Mitchell tapping into his very own childhood night terrors to create one of the most disturbing and successful cinematic experiences of recent years. Almost the same rings true with Aaron & Austin Keeling’s The House on Pine Street and, despite a frugal budget and DIY approach, the film serves up simple yet genuinely effective scares thanks to sheer gumption, resourcefulness and empathetic characters.

The house itself was a lucky find on co-writer and producer, Natalie Jones’ part thanks to an advertisement she placed on Craigslist. Dating back to the 1840s, it’s an inherently disquieting dwelling, replete with a disturbingly creepy hedge-edged path leading up to the front door. Being ushered into the house by a somewhat acrimonious landlord at the beginning of the film is never going to help matters either. 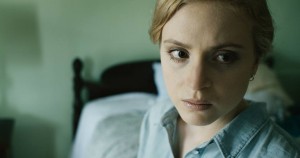 Aside from the house, the other real star is Emily Goss, who carries most of the film’s weight on her shoulders as the seven month pregnant Jennifer Branagan. It is no surprise that she won Best Actress at the Fargo Film Festival. Even in scenes with little to no dialogue she simply chews up the scenery. If it’s in a word or if it’s in a look, Goss plays it just as well as another astounding actress most of you’ve probably seen in a little film called The Babadook.

Many a critic has complained about the length of the film but, despite the two hour running time, what works so well, for me at least, is the film’s deftness in maintaining this lurking sense of trepidation and disorientation throughout as we are taunted as to whether or not what we are seeing is actually something sinister in the house itself or merely a figment of the protagonist’s ostensible unhinged mind.

Whilst the directing duo certainly do resort to some cattle prod scares that have been more than milked to death in other films, these are used sparingly and it was nice to see some unique scare tactics brought into play. A particularly effective technique was the use of some shuddersome camera eyeballing from children and old ladies alike. The effect is tough to express in words as it evokes a cheery-yet-eerie feeling at the same time. As odd as that might sound, these creepy stares freak you the hell out yet at the same time they bring a smile to your face. But believe me when I say we’re laughing WITH the film and not AT it. The most impressive and effective scene comes towards the end and is one I’d rather not spoil; suffice it to say that it has all the hallmarks of any special effects you’ve witnessed in any big budget horror movies; I’m still scratching my head as to how they pulled that one off to be honest.

So whilst I’ve never really been the world’s biggest fan when it comes to supernatural yarns, I’m quite the patsy for provocative and character-driven plots – something The House on Pine Street provides in leaps and bounds. Considering the aforementioned skeleton crew and budget involved, this is one production sure to encourage new and budding filmmakers to take the plunge as it really is one of the most meritorious indie horrors I’ve come across so far this year.