THE HOUND OF THE BASKERVILLES: Film Review 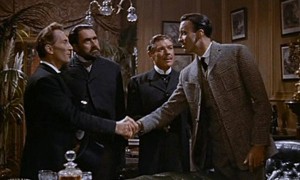 Synopsis:
A supernatural hound from hell has been haunting the Baskerville family manor for generations. After his father’s death, Sir Henry Baskerville confronts the mystery and brings on famous detective Sherlock Holmes and his assistant Dr. Watson to investigate.

Based on the novel by Sir Arthur Conan Doyle, The Hound of the Baskervilles is a Hammer Horror classic directed by Terrence Fisher. Since its release it has continued to serve as a much loved slice of British Gothic Horror. Baskervilles, complete with a thrilling mystery at its core, is a wonderful piece of celluloid that takes great pleasure in drawing in an audience in a web of mystery featuring swirling mists and a phosphorescent menace underpinned by terrific performances.

In all honesty, I couldn’t remember the last time I had seen this film but I certainly had a lot of fun revisiting it. I thought the directorial style was very moody and tastefully done. It allowed Fisher to slowly build a great deal of suspense as the story unfolded. Furthermore, one of the biggest delights for me is just how well the film is made. For example, it has many technical, and often complicated, shots (for its time) which are executed with poise that look incredible on screen.

Also worth mentioning is the art direction of the film. The Gothic style of the piece is quickly set as director Fisher maximises on the darkness, mixing in misty landscapes and unnerving glowing lights to further develop the presence of the supernatural. Meanwhile the story takes the audience on a thrilling ride whilst Sherlock Holmes and Dr Watson attempt to prove or debunk the claims that the Baskerville manor is being haunted by a supernatural force.

Speaking of characters, Sherlock Holmes and Dr Watson are legendary and there have been many interpretations over the years. Peter Cushing stars as Sherlock Holmes and Andre Morell joins as his assistant Dr. Watson. Their performances together are incredibly sound and believable. Moving on, Christopher Lee also stars as Sir Henry Baskerville the head of the Baskerville house. His performance is everything you would expect from a horror legend which is truly a wonder to watch. 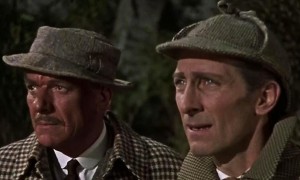 On reflection, this is perhaps one of my favourite adaptations of Sir Arthur Conan Doyle’s work and I thoroughly recommend it. The Hound of the Baskervilles is still fun to watch today and remains a technically sound production at that. Now that the film has been re-mastered by Arrow Films, I strongly urge anyone remotely curious about it to seek it out at their earliest convenience. You won’t regret it.