THE HORROR OF IT ALL: Book Review 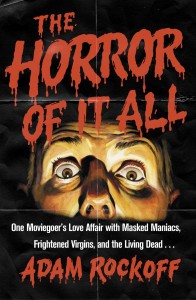 In 2002’s Going To Pieces: The Rise and Fall of the Slasher Film, horror fan, critic, producer and screenwriter Adam Rockoff made a name for himself as a horror aficionado, a title he’s apt to keep with his recent release The Horror Of It All.

The Horror Of It All is one-part personal memoir of a die-hard fan growing up in VHS movie stores reading early Fangoria issues, one-part social commentary on every aspect of horror film production from politics to censorship, and one-part written comprehensive history on the genre with a multitude of fun behind-the-scenes facts thrown in from Rockoff’s decades of research and fandom.

The book opens with Rockoff’s account of the making of a horror lover before the age of 10 (as well as the horrors of elementary school), a similar walk down memory lane for us as readers. What starts as a light hearted memoir of a horror fan with chapter one, turns into a nearly 30 page examination in chapter two analysing a Siskel & Ebert edition of Sneak Previews where the film critics rip apart the “Slasher” movie trend of the 1980’s with their ignorant claims of misogyny and their obvious hatred and disdain for most of horror.

Rockoff goes on to write about greatest kills in horror movie history, holiday slashers, misunderstood flops, and a lengthy chapter on “Horror Rock” music and Tipper Gore’s crusade for a music rating system. The history of snuff and “reality found footage” films are examined as well as the current state of horror and the era of the remakes.

The Horror Of It All is a personal account of horror film history by a horror fan for the horror fan for as Rockoff states, “…because my memories are yours.” You might roll your eyes at some of his personal tirades, none of which we haven’t already heard walking down the alley of a horror convention, but ultimately this unique account of our beloved history is worth your money. You’ll learn of obscure film titles, you’ll laugh at his account of a dinner out with Herschell Gordon Lewis, and you’ll marvel at one’s extreme passion for the genre, a passion of which we all share.

Adam Rockoff writes from his heart with cleverness and wit as well as a hell of a lot of knowledge. The Horror Of It All is right up there with any classic tome of horror criticism and history.