A parasite that loves filth is driven from its home in a landfill and finds refuge literally inside a hoarder, an elderly woman named Anna Grish. She lives in a house filled with trash, magazines, and all the other things she couldn’t bear to part with. The story then moves to her family and the local authorities trying to remove her from her blighted property and get her help for her hoarding. The parasite that controls her needs to spread and find more flesh to inhabit, whether human or otherwise. First it spreads to her cats. Then when others come to threaten her, she brings them into her nest and makes them hosts.

The hoarding setting is a great idea. There are plentiful descriptions of the grime, feces and junk that make up Anna’s house, or, as it becomes, her nest. It is the TV show Hoarders taken to the millionth degree. The book takes an interesting turn into examining hoarding as a form of mental illness. I liked the concept of the parasite. It healed the ailing Anna and gave her strength and agility beyond her years. From the descriptions, it was hard to get a vivid image of what the parasites looked like in my head, other than in the grub stage. Apart from Anna, the other major characters are her family that lives on the next property – mostly her son, Peter. The characterization of Peter is good, portraying his struggles to please an impatient wife, while also dealing with his mother and doing the right thing by her. Added to that are financial struggles, due to his failing farm yield. He’s a sympathetic character. One of the problems I had with the book is that the other characters seemed peripheral and were not fleshed out enough. They would play a role, appear and then get killed, but you’d never get to know much about them. The other character who does get better developed is Rebecca, Anna’s social worker, but we don’t see enough of her.

It’s fascinating to watch as an infected Kansas State science student, Bryce, and Anna, rightful queen, fight to establish dominance of the nest. It added a new dimension to the hoard structure and the way the leadership of it functioned. However, the division between infected humans did somewhat take away from the scariness of the hoard. I wanted the parasites to be relentless and single-minded. This interaction sort of broke the hive mind idea. 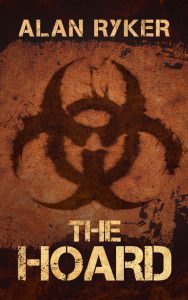 The gore is good and very much appreciated by this reader, with body horror one of my favorite sub-genres. This took me back to being obsessed with the early films of David Cronenberg. I just felt that it needed more. The parasites are inside people but then don’t really do anything other than control them. This is just my personal taste, but as a big fan of the splatter genre, there were some amazing missed opportunities from this set up.

The story plods along at points, and with such a narrow focus on the Grish family it seemed like some potential was missed. The whole book takes place in just a few locations, and that is to its detriment. It feels like the threat only grows marginally throughout the book while I longed for it to grow exponentially. I was gripped for the first third and the last third of the book, but it dragged in the middle. Based on the ending, I would guess that a sequel is coming. Hopefully it will expand the scope of the story and also provide more back story on the parasites.