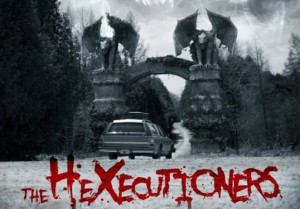 Synopsis:
Two disparate young women working for a company that conducts euthanasia are dispatched to a remote estate to perform a custom assisted-suicide ritual, but unwittingly summon the wraiths of a Death Cult that once inhabited the property.

Jesse Thomas Cook’s latest shocker The Hexecutioners is a slow-burning and eerie chiller that combines clean cinematography and an unsettling ambiance. Set in a world where it is legal for private medical firms to conduct assisted suicide procedures, The Hexecutioners follows Malison McCourt (Liv Collins), a young twenty-something who is new to the job. After experiencing a particularly unpleasant incident with one of her clients she is paired up with Olivia (Sarah Power) in order to boost confidence. When the pair are invited to an isolated mansion they soon begin to encounter unexplained noises, unnerving nightmares and dangerous forces beyond their control.

Considering the plot of the film, its premise may inspire a sense of controversy but this quickly fades and becomes a reason why the two leads arrive at their destination. At this point the film plays to every convention of the haunted house thriller; there are eyes looking back at characters through small holes, plenty of fake scares and moments of catching things out of the corner of the eye. Sadly, although The Hexecutioners has its fair amount of creepy moments, it never quite gathers enough momentum to hold its own. 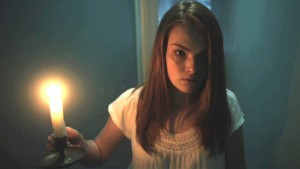 The cast are okay at best but their performances are notably campy. As Malison, Liv Collins has a number of dramatic scenes but her performance overall comes across as flat and overplayed. As for the rest, none of the characters in this film are developed in a way that makes them relatable. That said, Power’s performance as Olivia does bring an interesting dynamic on screen opposite Collins but on her own fades into the background.

Ultimately, I didn’t find The Hexecutioners particularly scary and the amount of tension built failed to keep me engaged as a viewer. But there are a number of commendable aspects to the film as it is technically sound. Jesse Thomas Cook has a great eye for detail which is perfectly complemented by Karl Janisse’s cinematography. The film looks fantastic, and the same can be said for the special effects and sound design. But ultimately, as a horror film, it lacks its punches.