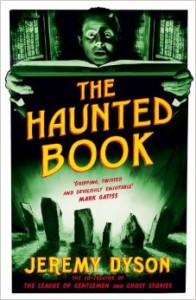 Synopsis:
Jeremy Dyson is contacted by a journalist, eager to engage his help in compiling a book about the ‘true’ ghost stories he has gathered over the years. An avid believer as a child but now a sceptical adult, Dyson travels to the various locations and presents his fictionalised accounts for the reader’s pleasure, while struggling with his own perceptions of the supernatural and mortality…

…Or for half of the book he does anyway. This book starts off in fairly standard M.R James anthology territory, before veering into slightly stranger waters when the book evolves into a Russian Nesting Doll of ghost stories and then makes a very sharp right turn into…something else entirely.

As the co-creator of the BBC’s deliciously dark League of Gentlemen and West End hit Ghost Stories, Jeremy Dyson certainly has form in the strange, the macabre, and the ever so slightly mad. All words that could be used to describe this book. It starts off innocuously enough, with Dyson describing his childhood fascination with the paranormal and the thrills of scaring oneself silly at that age, which is certainly something I could relate to in spades. Now a husband and parent he is definitely more on the Scully end of the spectrum of True Believerness when he is contacted by a journalist named Aiden Fox (and keep an eye for that name folks) who wants to work with him on writing a book filled with fictionalised accounts of the numerous ‘real life’ supernatural events readers have sent his way over the years. Initially reluctant, Dyson decides to do it and begins to visit the places where these supposed hauntings take place.

Some readers will find this lack of flow and consistency jarring, I did at first, as I was enjoying Dyson’s narration and journey. But the stories contained within these various books (all written by men with interesting, yet familiar names) are just as well written and the creepiness factor is heightened as the books get older, the tales more sinister and ideas and themes laid out in the first section of the book start to become clear. And as happens so often in life, just as I was really enjoying this section of the book, we change lanes once again and something truly odd happens. I won’t spoil it, but I can see it being a very divisive ending. I both liked and disliked it. There is no real resolution and many of the questions laid out in the earlier stories are left unanswered, which is frustrating. It is undeniably clever, and as a love letter to the power of books it is very affecting. But the slight undertones of pretension and lack of solid conclusion will undoubtedly alienate some readers.

Overall, while only a couple of stories contained within The Haunted Book (or Books) had any effect on me remotely approaching fear I found it well written and engaging. Part of me wished it would have been a straight forward ‘true hauntings’ ghost story anthology as it appeared to me when I first started reading it. Instead it appears Jeremy Dyson has given us something fully fictional, presented as non-fiction. Having seen some of Jeremy Dyson’s other work, I should have known there would be many twists and turns and I’m glad he tried to do something different with the ghost story formula, even if it wasn’t entirely successful.