The Hatching Official Trailer Shows Somerset Being Snapped Up 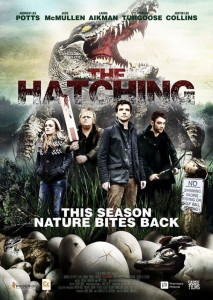 The amount of creature features has been piling up recently, and The Hatching looks like it’s going to have one hell of a bite in this UK b-movie crocodile blood-fest.

The first official trailer and posters have hatched from their eggs, and we get to see what director Michael Anderson has clenched in his teeth for us. There are prehistoric monsters, grinded up limbs, some incredible special effects and lakefuls of blood and croc-carnage.

No release date has been announced yet, but we will be sure to let you know.

Synopsis:
Tim Webber returns to his childhood village in Somerset, after the devastating death of his father. Upon return, he discovers that life isn’t so quaint in his little village, as something has been grimly murdering the villagers and leaving quite a mess behind. The truth unravels that crocodiles have made the moors their hunting grounds and Tim must tie up old mistakes before any more heads are found lying around.