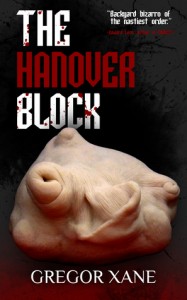 The Hanover Block by Gregor Xane is a novella that was released in November last year and has sat patiently waiting for me to pick it up ever since. What stopped me? That’s an easy one, that fucking thing on the front cover. I mean what the fuck is it, well I can’t tell you, it will ruin the story but please don’t get into the same mindset that I did. There’s a bizarro genius at work here, it’s not something I read a lot of but this was funny in a seriously warped kind of way.

Marion is an office worker, he catches the bus to and from work and we live his life, meet his friends, his neighbours. Smoke a joint with him, couple of beers, you know the score whilst almost unnoticed his neighbourhood is changing in a stealthy, shady fashion from one day to the next. People are behaving strangely, dodgy constructions are appearing in people’s back gardens from sheds to climbing domes.

It’s not until half way in that we learn about that thing on the front cover and normality leaves on the last train out of fucksville, we’re left with what can only be described as a bizarro mindshagging with thoughts, interspersed with laughter along the lines of, this Xane guys never right in a million years. Still it’s a barrel load of mental fun and I quite enjoyed it, just don’t let that cover picture put you off.

In case you’re wondering Bizarro fiction is a genre which often uses elements of absurdism, satire and the grotesque to create subversive, weird and entertaining fiction. That describes the Hanover Block perfectly so approach with an open mind.