The Halloween Classics That Are Perfect For A Spooky Night In

One of the many perks of Halloween is the opportunity to curl up in front of the sofa and scare yourself half to death with a horror flick or two. Here are some of our favorite spooky classics that are great for a Halloween night in. Grab some friends or watch them alone if you dare.

Setting the Scene
No spooky night in is complete without setting the scene. So before you start browsing Netflix or begin sifting through your DVD collection, be sure to grab yourself some snacks; popcorn is always good but mix it up with some chocolate or other candy, it is Halloween after all. Next, make sure your home theatre system is set up perfectly as this could make or break a movie. One of the main reasons why most horror films are so scary is because of their eery music and loud bangs when you least expect it. Good bass, surround sound, you got this!

Steven King’s The Shining
This classic and eery movie based on Steven King’s novel follows Jack Nicholson’s character Jack Torrence, a writer who becomes the winter caretaker of the Overlook Hotel and slowly descends into madness. His son Danny also suffers from his own frightening premonitions whilst in the hotel and things end on a pretty haunting note.

The Exorcist
Back when The Exorcist was first released, it was deemed one of the most frightening horror films ever released and was subsequently banned from being shown in some areas. Here in the US, there were reports of people passing out because of how awful it was. Luckily, this hype made it one of the most profitable movies ever made. It’s very loosely based on true events and follows a young girl, Reagan, who starts behaving erratically and is said to be possessed by the devil. Her mother, played by Ellen Burstyn then seeks help from the church to perform an exorcism.

The Strangers
Although this film is one of the newer ones on the list, it doesn’t make it any less creepy. Three murderous people with weird sacks on their head break into a couple’s vacation home whilst they’re away for the weekend. It’s a particularly unsettling film due to the significant lack of dialogue, they just hover…in the background…waiting to cut Liv Tyler up. 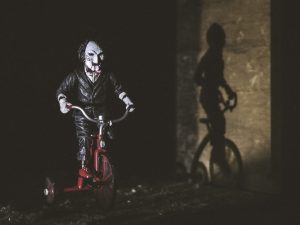 Saw
I really enjoyed the first Saw movie, it was different, a little bit gory, and had one hell of an ending. It’s a bit of a shame that the whole Saw franchise ended up being taken a bit too far because it makes viewers forget the epic curveballs, mystery around how the two guys were connected and that tense ending.