Synopsis:
A family who move into a remote mill house in Ireland find themselves in a fight for survival with demonic creatures living in the woods.

Whilst the basic premise might fall into well-worn horror conventions, Hardy’s genre-melding The Hallow never loses its way in the woods. Moreover, it finds its bearings precisely by going off the beaten path to blend pseudo-historical and mythological legends into a wildly unflinching post-modern fairy tale-cum-body horror.

There’s no denying that the film is a hybrid brainchild of the likes of The Thing and Straw Dogs, something Hardy has no qualms about confessing to, but The Hallow boils down to so much more than a simple hotchpotch amalgamation of the aforementioned thanks to its unconventional creature designs, discerning performances and Hardy’s knack at gradually tightening up the tension as the evil creatures in them there woods prepare to avenge those who trespass against them. Things would at first suggest a logical explanation before it becomes more apparent that there are creepier things afoot and this whole hypothesis is played on perfectly and bolstered by Michael McElhatton’s solid performance as the surly neighbour, Colm. In the wrong hands this role could have so easily been overcooked but his genuine and sanguine portrayal really instils all kinds of expectations and fear into the audience.

The two leads are just as disgustingly talented. Mawle chews up the shrubbery with dynamic conviction, carrying the brunt of the film as the “tree doctor” struggling to juggle his devotion to his family with his scientific curiosities. Meanwhile, Novakovic might not get quite as much of a chance to shine at first but she just oozes luscious screen presence and the final reel gives her some juicy material to chew on and, when it arrives, she goes far and beyond the call of duty. Failure to mention Michael Smiley would be untoward here as he adds so much extra zap (as he always does) in a small but effective role as the local police officer who makes light of things that go bump in the dark. With such cracking acting all round, when the fuse does finally reach its explosive end it’s these performances that evoke a real heartfelt audience response as you can’t help but root for the characters, especially when a perturbing “Who can we really trust?” element sets in.

When a creature feature has the balls to show you what the monsters are really made of it needs to make damned sure it can deliver the goods and this is what really separates The Hallow from its counterparts as the effects John Nolan (Where the Wild Things Are, Hellboy) and his team provides are outstanding. These resourcefully devised effects and some savvy cinematic sleight of hand ensures that the Rob Bottinesque creations are jaw-droppingly convincing and never come across as tacky, even in a particularly memorable scene where the creatures are laid bare for all to admire. Kudos here to Peter Elliott, the original ape in Greystoke as, without his creature choreography, I’m sure a lot of what we see couldn’t have been pulled off as well as it is.

Cue DP Martin Van Broekhuizen’s whose cinematography perfectly exploits the scare potential of the murky woodlands. The use of light sources and shadows really ramps up the sensation of isolation and lurking perils and there really are no surprises here as to why Van Broekhuizen was Hardy’s first choice as DP for The Crow. James Gosling’s score also really gives this modestly budgeted movie much more of a cinematic clout. Evoking classic horror, the arrangements are just as immersive as anything you’ll find in the latest Hollywood blockbusters yet at the same time they are wisely restrained to make sure that the actors (and their actions) are never drowned out and remain at the forefront. Sidetracking slightly but the use of other tracks in the film provided some nice touches, particularly a scene with Mawle driving along with his baby in tow as he switches up the beat from a nursery rhyme in favour of the slightly more aggressive number from The Outlets called “I’m A Mess.” These are just little touches but it all help us to really get on the same wavelength as the characters we’ll soon be rooting for.

In short, The Hallow might not be quite the game changer that Carpenter’s The Thing was but Hardy has made all the right decisions to keep clear of the roots of all evil that plague many a creature in the woods feature. His keen eye for the smallest of details – be it the performances, the effects, the cinematography, the score or the scares – ensures that The Hallow throws some highly flammable nightmare fuel on the fire. Oh, and then Hardy goes and seals the deal with an unexpected potential sequel mid-credits stinger with Dry the River playing in the background. Hallowed be those who refrain from leaving too soon.

Be sure to catch The Hallow at the following cinemas in the UK and Ireland as of this Friday November 13th: 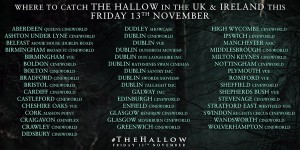