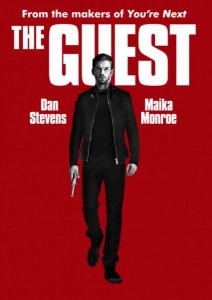 Synopsis:
A family welcome into their home the friend of their dead son only to find he’s not who they think he is.

Recently I’ve been inundated with Seventh Day Adventist’s calling at my door at all times of the day  generally causing me a great deal of inconvenience as I cobble together literary masterpieces worthy of the back of a cigarette packet.  However I’ve found that since answering the door to them naked with my dangly bits painted day glow orange they have strangely refused my offer to come in for a cup of tea and a munch on a ginger nut and now no longer call. Shame. That said in Adam Winguard’s new film, ‘The Guest’, when a young male calls at the house of a family recently mourning the death of their soldier son killed in combat and claiming to be a friend of his they welcome him in insisting that he stay with them. Perhaps they had Hob Nobs rather than ginger nuts. So in he comes and stays with the stereotypical dysfunctional family : the bitter father overlooked for promotion,  the slutty daughter, her bullied at school brother and not forgetting the underwritten mother role. What could possibly go wrong?

The first sign that all is not as it seems is when Dan Stevens as ‘the guest’ takes the son to a bar to wreak vengeance on the bullies tormenting his school days and then proceeds to ‘help’ out the rest of the family with their issues before his unique problem solving skills begin to spiral out of control to the detriment of the family. This is Director Adam Winguard’s follow up to last year’s house invasion thriller, ‘You’re Next’, and like that Carnival of Carnage this has also been written by Simon Barrett and between them they manage to shoehorn a small throwaway  homage to their last success when a party guest dons one of the animal masks. This is a well worn genre and begins well enough which for the first two acts rattles along entertainingly enough but by the third act…. oh dear.  By the end it rapidly degenerates into what appears to be a cast off from Jean Claude Van Damme’s very worst 1980’s straight to video films  with a deranged back story and enough dry ice in the climatic finale to put Top of the Pops to shame.

With Winguard again directing and editing as he did with ‘You’re Next’, he continues to demonstrate his ear for music using it in jarring contrast between scenes whilst in others using it to slyly comment on the action although much of the soundtrack contributes to the films 80’s ambiance.

This marks a change of role for Stevens, the Cambridge educated & former Booker prize judge,  having portrayed similar stuffed shirt roles in both Downton Abbey and Sense & Sensibility previously but at times he’s a little too po-faced to the point of parody whilst Maika Monroe as the teenage daughter initially drawn to him is something of a Chloe Sevigny/Gwen Stefani hybrid.

At 90 minutes it doesn’t outstay its welcome and as an avenging angel story it’s fine but there’s little here that hasn’t been seen before. I’d like to say a bit more but those Seventh Day Adventists are at the door again – now where’s that day-glow paint?