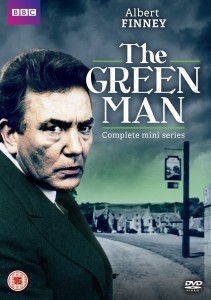 Synopsis:
Life is getting Maurice Allington (Albert Finney) down. Not only does he have the headache of running The Green Man Inn – his picturesque English country bed-and-breakfast – but he also has to look after his decrepit father (Michael Horden), moody, adolescent daughter and irritable wife, as well as keeping alive his secret affair with the wife of the local doctor. On top of all of this he has to constantly pretend to his paying guests, that The Green Man is haunted by an array of authentic and mischievous ghosts – well he has the keep the American tourists happy somehow. When it begins to appear however that there may be more than a grain of truth behind the story of a 17th century occult scientist Thomas Underhill (Michael Culver) whose ghost is meant to frequent the shadowy rooms of the hotel on dark and stormy nights, it takes all Maurice’s modern day cunning and deceit – as well as a little help from the local vicar – to lay the malevolent Underhill to rest once and for all.

Sex aside – and despite the inclusion of the somewhat ineffectual vicar and a bizarre incarnation of God as a sharp suited young gent with a taste for whiskey – when the horror kicks in it does so with atmospheric yet disturbing intensity. Though surprisingly little is made of the connection between the green man of the title and that of British folklore, there are none-the-less subtle hints of the pagan religions and rural beliefs which still saturate many of Britain’s bucolic backwaters. Despite most of the story’s odd occurrences taking place within the confines of The Green Man Inn, when the action does venture outside the production makes the most of the picturesque British countryside, shrouding the overall programme with an atmosphere of deceptive tranquility, hiding something more sinister which constantly bubbles just beneath the surface.

And it is outside where director Elijah Moshinsky and screenwriter Malcolm Bradbury – who adapted the story from the satirical novel by English author Kingsley Amis – really go to town with some genuinely unpleasant moments: the production was apparently filmed on location with West Dorset doubling for Cambridgeshire, though why they couldn’t film in the actual county seems odd. The opening scene is particularly well executed and graphic for mainstream television, reminiscent of the infamous forest rape from 1981’s The Evil Dead, whilst the marvellously chaotic destruction of a woodland tree at the story’s climax evokes memories of such fellow horrors as 1982’s Poltergeist and 1990’s The Guardian.

Though perhaps not as terrifying as the no-holds-barred horror produced today, The Green Man is none-the-less a classic example of what the English do best – understated, atmospheric and effectively creepy ghost stories, which aim for slow-build disturbing disquiet, as opposed to wham bam, in-your-face horror.