THE GOD INSIDE MY EAR: Film Review 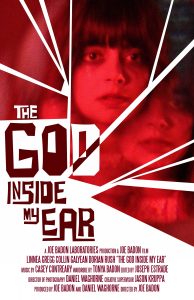 Writer/director Joe Badon’s debut feature film The God Inside My Ear is a challenging yet wholly accessible and satisfying blend of surrealism, horror, psychological thriller, and science fiction. Imagine Repulsion by way of David Lynch and Luis Bunuel, with some Douglas Sirk high melodrama for good measure, and you start to sense what you are in for.  It is also a marvel of independent filmmaking, and its terrific production values belie that it was made in 13 days for a mere $8,000.

Linnea Gregg turns in a winning, often hypnotic performance as Elizia, who is dumped by her boyfriend Fred (Joseph Estrade) when he announces that he plans to do some solo soul searching that involves esoteric leanings. Elizia is devastated — “broken,” in her own words — and her world starts to fall apart in highly unusual ways, including being engaged in reluctant conversations with her neighbour’s dog and a garden gnome. Elizia’s friends and therapist try to assist her as she continues on a downward spiral of confusion and depression, alternating between claiming to see God and feeling that she is being controlled by sinister outside forces.

Badon constructs a tantalising world filled with images that baffle and delight. Drawing on everything from pop religion to conspiracy theories to obscure references, he brings plenty to chew on regarding the proceedings. Badon is an artist of drawings, comic books, and more, and his visual flair translates splendidly to the screen. Daniel Waghorne’s crackerjack cinematography and the colourful set design aid greatly to the film’s lush feel, and Joseph Estrade’s editing keeps things tight and smooth. The score, written and performed by Badon along with Casey Contreary, Michael Walworth, Brian John Mitchell, and Jason Kruppa, offers various styles of music that heighten the goings-on perfectly. 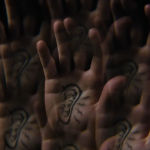 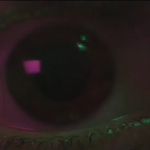 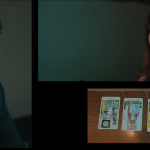 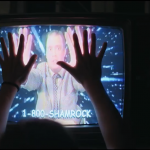 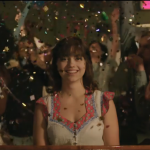 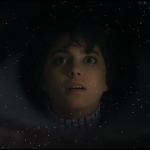 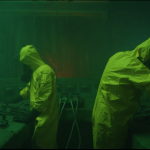 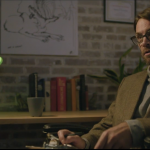 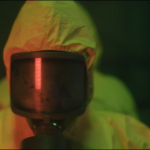 Elizia goes through myriad emotions on her journey from being broken up with to her final path, and Gregg nails each nuance sublimely. Elizia’s worlds are inhabited by uber-nerd dates, duplicitous schemers, and a mysterious telemarketer, to name a few. The cast members bring each character to vivid life. Some characters and performances would fit well within Roman Polanski’s apartment trilogy, a Frank Henenlotter movie, or a John Waters film, while others are played far straighter.

The horror in The God Inside My Ear is not of the graphic or jump-scare variety. Rather, it comes from witnessing a seemingly ordinary young woman slowly descend into depression, madness, and paranoia, and feeling the helplessness both she and those close to her feel. Sharing much more would take away from the riddles and surprises that Badon has in store with this electric indie debut. The film is just about to begin its film festival run, and is highly recommended as a fresh, enthralling debut from a new, highly talented cinematic voice.