THE GIRL NEXT DOOR: Film Review 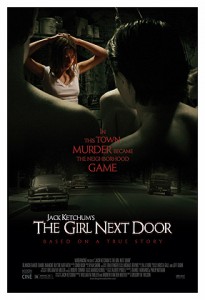 Synopsis:
A young girl is held captive in a suburban home. There, she is subjugated to torture, humiliation, and sexual assault at the hands of a matriarch and her three sons.

Stephen King once described horror writer Jack Ketchum as the ‘scariest man in America.’ It’s quite easy to understand that statement. In a sense, Ketchum’s work is the definitive ‘napalm to Norman Rockwell.’ Whatever we consider the American dream, or what we think of as typical Americana, Ketchum destroys all original conceptions. So very often he’s lifted the curtain from the façade, to show us a dark reality of what lies behind the white picket fence.

Case in point: The Girl Next Door, released in 2007. It’s a film based on Ketchum’s book of the same name, and directed by Gregory M. Wilson. One of the elements that make this film so shocking is the fact that it’s based on actual events. There’s an old saying; ‘truth is stranger than fiction.’ This is a work that proves that phrase to be completely correct. Before analysing this work, some backstory needs to be explained.

The events that transpire are based on the infamous Sylvia Likens murder case. In 1965, the traveling Likens family placed Sylvia and her sister Jenny in the care of Gertrude Baniszewski. Sylvia was subjected to extreme torture at the hands of Gertrude and several neighbourhood boys that would end up ending her short life. Some of the acts performed on her were nothing short of inhuman. She was burnt by cigarettes, starved, beaten, and even forced to engage in coprophilia. 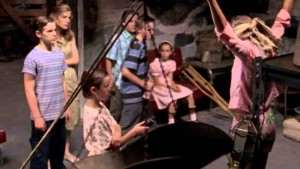 Although the names have been changed, and the events have slightly been altered, the essence of the original case file is very present. As the viewing audience for this one, we’re plunged into the depths of a suburban Hell. We see what goes on behind closed doors, and it’s not always what one might assume from a quiet neighbourhood.

The story is centred on two young girls named Megan and Sarah. They’re held in the custody of their dysfunctional foster mother named Ruth, and her four sons. The story is told in flashback from the perspective of a man named David. A married stockbroker in the present, he looks back to his days of adolescence. From this point on we’re transported to middle America in the 1960s.

Throughout the film, we witness a world of torture, cruelty, and manipulation. We’re forced to watch Megan endure suffering on a level that few are capable of imagining. Horror continually takes us out of our comfort zone; it touches upon emotions and feelings, which we’re not in touch with on a daily basis. By forcing us to watch someone suffer helplessly, it forces us to confront a part of ourselves that we would like to ignore, but sometimes lack the ability to do so.

David becomes the proverbial witness to atrocity; frequently visiting the home and watching these horrible events unfold. In some ways, his role is very similar to the members in the viewing audience. He sits in the foreground watching some of worst things imaginable, lacking the ability to intervene. 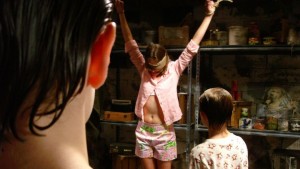 There’s no getting around the visceral nature of these scenes. They’ll make you cringe, as well as leave a lasting effect on you. However, they’re also presented in a way that doesn’t resemble a snuff film. Much of the emphasis is placed on the reaction of the characters involved, not the action itself. When on-screen violence is shown, it provokes a response, but doesn’t repulse. Beneath all of the abuse, there’s an underlying theme of manipulation. This is explored in the relationship Ruth has with her own children. She indoctrinates them into being sadists, grooming their behaviour little by little. In handing over the reigns of exploiting the victim, the seeds of cruelty are sewn in.

The real shock you’ll experience is watching how far Megan’s subjugation goes, and how hopeless her situation grows over time. The horror here has a psychological edge, one you’ll be thinking about long after the end credits roll.