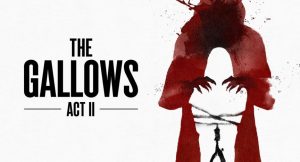 Synopsis:
Those of you that remember the travesty that was 2015’s The Gallows will probably wonder who greenlit the follow-up and why. I, also, would like to know. The Gallows was an un-scary dud of a horror film that buried the found footage genre so far underground that we’ve seen nothing from it at the mainstream box office since. Both that and Paranormal Activity: The Ghost Dimension suggested that audiences were no longer impressed by cheap camcorder frights.

So, what did directors Travis Cluff and Chris Lofing decide to do for The Gallows Act II? Aside, from a short opening scene, they scrapped the aspect of Found Footage. The film goes back to traditional film-making. Phew, that’s one thing to get excited about! Alas, as an improvement on the first and as a general horror film, The Gallows Act II is, in many ways, worse than its predecessor.

The film follows Auna Rue who, hoping to increase her online popularity, takes part in an eerie viral challenge that sees her awaken the spirit of Charlie and his hangman’s noose. It’s all very boring and often convoluted where, to an extent, it becomes difficult to follow what on earth is going on. 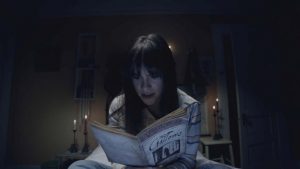 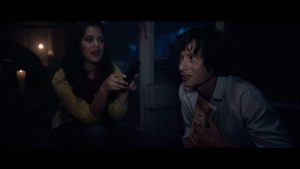 Auna studies at a prestigious acting school and is soon praised for her monologue recital from The Gallows. All the while, she’s posting videos of her readings on her YouTube channel and – hooray! – they’re getting her the millions of views and subscribers she’s always dreamed of. But, at what cost? When she re-watches her posts she sees lamp posts flying, tables moving and the ominous Charlie lurking in the background. Eventually, marks start appearing round her neck and she realises she probably shouldn’t keep reading excerpts from the cursed play… 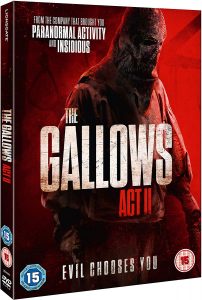 Everything plays out as you’d expect; things go “BOO!” in various dream sequences and Charlie poses the same unimpressive threat as he did in the first film. It truly is as dull as dishwater and is all the worse for the lacklustre acting that attempts to bring this film to life. It’s some kind of upsetting irony that a film about actors is acted so poorly. As the lead Auna, Ema Horvath is devoid of any kind of charisma or on-screen charm and is, in short, painfully annoying. It’s not just Horvath’s fault though, because Lofing and Cluff’s script is uninspiring, tiresome and filled with clichés. 31-year old Chris Milligan is perhaps the worst part of the film, sticking out like a sore thumb as a fully-grown man in the school. His romance with Horvath is awkward and difficult to watch, because the pair have zero chemistry.

I’d tell you all to give this one a miss but it goes without saying, because no one asked for this. It’s baffling that Universal and Blumhouse condoned this travesty.

THE GALLOWS ACT II is out now on UK DVD and Amazon Prime Video courtesy of Lionsgate Home Entertainment.