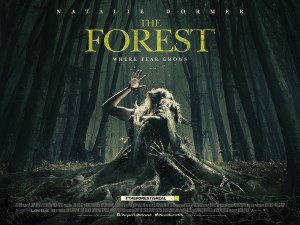 When it comes to supernatural horror there’s nothing more unnerving than it supposedly being based on truth. Aokigahara, a 35-square-kilometer forest, lies at the north-west base of Mount Fuji in Japan and is  infamous for two things; its mythological roots and tragically high suicide rate. That fact alone sets up an interesting premise for a horror film so it is unsurprising that there have already been several films based around this macabre setting but The Forest is the first of them to make it to the big screen.

The Forrest sees Jason Zada directs Natalie Dormer as Sara, a woman who travels to Japan’s famous suicide site to find her twin sister. What happens next is ninety-odd minutes inspired by every J-Horror out there with some brilliantly tense moments of its own thrown in for good measure. The Forest is far from perfect but it remains a cut above the usual tripe that audiences are treated to early in the year.

On that note, Zada does a great job in taking his time to set a dark tone for the film. From there he steadily builds up to several moments where he manages to keep his audience on edge. Sadly by the time of its climax, an over reliance on ghost faces, predictable jump scares and a very predictable ending brews a disappointing spell which left me thoroughly disengaged.

The same goes for the cast. Natalie Dormer has the job of playing two roles in the film as Sara and Jess. Both characters are polar opposites and Dormer’s performance feels wholly different. Also, Taylor Kinney does a decent job too. As Aiden, he brings an intensity that quickly installs a sense of distrust. Together they manage to keep the film ticking along nicely but their performances are marred by how predictable the film becomes.

At the end of the day The Forest isn’t that bad for a horror film. It plays to all the usual tropes of the genre but the film is elevated by the way Zada’s executes them. As a filmmaker he shows that great knowledge and respect for what he does. But as mentioned previously all the hard work done to underpin the film is quickly undone by a lackluster ending which lacks the impact it was aiming to achieve.