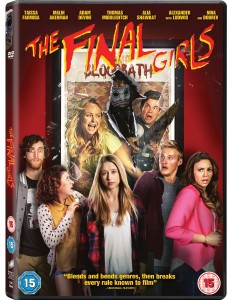 Synopsis:
Three years after the death of her mother Amanda, a ‘Scream Queen’ actress; Max (Taissa Farmiga) and her friends attend a double bill of Amanda’s best-known features, Camp Bloodbath and its sequel. After a fire breaks out in the cinema, Max rips a hole in the screen so her and her friends can escape the blaze. They then find themselves in Camp Bloodbath itself. Max must find a way to survive the events of the film while taking the opportunity to reconnect with her mother through her character Nancy, a prim camp councillor.

The list of films that attempt to deconstruct the horror film is now long enough that the post-modern horror could now be considered a sub-genre in its own right. The Final Girls follows the likes of Cabin in the Woods, Tucker and Dale Vs Evil, the recent meta-remake of The Town that Dreaded Sundown and, of course, Scream in being a comment on the genre while being very much within it.

Stripped to its essentials The Final Girls is a parody slasher film that takes its cues from the now stale scenario of Friday the 13th, allowing us to nod along in a warm nostalgic glow as the tropes are dusted off one-by-one and prodded in gently satirical fashion; from the priapic jock, the black guy who dies first, all the way to the final girl herself. What sets it apart from the lazy and redundant references of the Scary Movie franchise is that the meta-narrative trappings are an integral part of the story itself. Like the recent Nina Forever, Max is able to connect once more with a deceased loved one and experience, if not closure, then some of the precious time that was snatched away. Straight away this invests The Final Girl with a great deal of heart, and an emotional connection that is missing from most of the slasher genre, right back to Friday the 13th itself. Add to this some engaging and nicely-weighted performances from the like of the increasingly impressive Taissa Farmiga, Malin Åkerman, Alia Shawkat and some inspired/ irritating comic gurning (depending on your tolerance for such things) from Adam Devine.

Sadly, despite the clever and witty script, The Final Girls falls squarely on the ‘comedy’ side of comedy-horror. There is nothing that is going to raise so much as a whimper, let alone a full-on scream. In fact, it’s strangely bloodless in its approach to the on-screen carnage, and as such it’s hard to see at whom exactly director Todd Strauss-Schulson and writers M.A. Fortin and Joshua John Miller are aiming the film. As its impact relies so heavily on knowledge of a film series that never knowingly played with subtlety or skimped on the ketchup, it seems strange that its homages seem neutered by some PG-13 sensibilities. Add to the mix a reliance on some unimpressive CGI at the expensive of classic practical effects and so much of the goodwill the film generates in the early stages is undone.

That said, a film this well-written and genre-savvy will always find an audience, and there is much to like in The Final Girls if approached with any expectation of a Scream-level classic dialled down considerably.