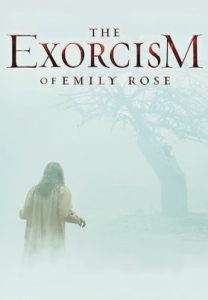 Synopsis:
When a young epileptic named Emily Rose (Jennifer Carpenter) dies after an exorcism, the attending priest, Father Richard Moore (Tom Wilkinson) is brought to trial for negligent homicide. Erin Bruner (Laura Linney), his attorney, attempts to persuade him to plead guilty but Moore insists that he must tell the young girls story for the world to hear.

It seems strange that a movie about exorcism could claim to be inspired by true events. After all, weather or not the spiritual battle between good and evil exists is a matter of personal belief. For some, demonic possession is a very real phenomenon, one that lies at the very core of religious dogma. Naturally, there have been several titles over years to depict this struggle, with some efforts being more watchable than others. One of which, The Exorcism of Emily Rose was brought to us in 2002 from director Scott Derrickson. Loosely inspired by the real case of Anneliese Michel, it’s one in a long line of films that goes under the pretence of claiming to be ‘based on a true story.’

As a young woman who suffered from severe epilepsy, Michel underwent a series of exorcisms at the behest of her family who were troubled by her illness. During this time, over 60 sessions were performed, some of which were recorded. She eventually succumbed to dehydration and malnutrition, weighing roughly 60 pounds at the time of her death. Charges were eventually brought before the performing priest and her parents for negligent homicide, only to be let off with minimal punishment. There was nothing about this particular case that had anything to do with spirituality; it was a clear-cut example of neglect and the inability to properly diagnose mental illness.

Michel’s ordeal, while tragic, could have made for a very compelling film. However, The Exorcism of Emily Rose shamelessly glosses over many of the intriguing facets of the case in favour of something else entirely. Instead of attempting to cultivate a story that surrounds the neglect of someone who suffered unimaginable pain, it opts for a courtroom drama with flashbacks depicting the events that lead up to an exorcism and the subsequent aftermath. Some of the alleged stories from Michel’s ordeal make it into the movie, such as her supposed consumption of spiders and self inflicted injuries that were most likely the result of convulsions attributed to epilepsy. Much of the dialogue screamed by Emily in hysterics is lifted from the audio recordings from Michel that have survived to present day.

While the scenes involving exorcism are well put together, and Carpenter’s ability to contort her body and scream erratically are certainly present, there isn’t nearly enough material to sustain a proper character transformation. There’s very little of her life that’s shown before the affliction, and her ordeal seems rushed to some extent. One of the things that made The Exorcist such a crushing film was the helplessness of the victim in the jaws of evil. There was a progression with her character that was well paced and made you genuinely feel for her as she underwent experiences. Little is done with establishing the plight of Emily Rose as a character. Her backstory comes across as disjointed, and you’re not given any time to invest in her. For a movie based on a real life tragedy emerging from an exorcism, it focuses almost all of its attention on courtroom procedure, which greatly undercuts the effectiveness of everything else. 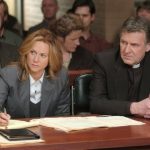 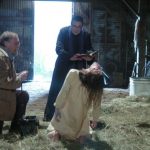 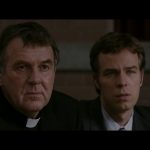 The scenario that plays out within the courtroom feels less like a case about negligent homicide, and closer to religion being contested within the court of law. Both lawyers take up contrary sides debating on weather or not Emily’s tribulations were the result of actual demonic possession or the deficiencies of mental health. While the film attempts to establish Father Moore as a solid protagonist defending the articles of faith, it ultimately fails in doing so. He’s not relatable in any way, and if anything it’s his defence attorney who has the real character arc within the story, as she comes to terms with the reality of possession. The prosecution is firmly painted as vindictive, and one can’t help but feel that the trial scenario has a hidden agenda of establishing a persecution complex.

Arguably the biggest fault contained within the film is its third act. Shamelessly forcing in a contrived subplot involving martyrdom, it only reinforces the religious undertones that are present throughout. There is a need for movies based on real life events, especially those that are among some of the most horrific. The Exorcism of Emily Rose, while compelling at times, is nothing more than a blatant attempt to utilise a real human tragedy for an agenda. If there’s one thing that it does accomplish it’s proving that truth is always stranger than fiction.