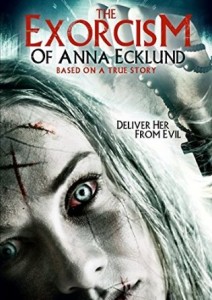 Synopsis:
Mild-mannered housewife Anna is exhibiting all the symptoms of demonic possession. Her husband takes her to a convent to have an exorcism performed, but Anna’s behaviour is getting worse and all hell is about to break loose.

The Exorcist came out in 1973 and, more than forty years on, is still widely considered to be one of the scariest films ever made. I bring this up because its 2016 and you’d hope that filmmakers would know better by now than to try and make yet another Exorcist rip-off, but here comes The Exorcism of Anna Ecklund to prove us wrong.

I don’t hate exorcism movies. I found 2005’s The Exorcism of Emily Rose and 2010’s The Last Exorcism to be enjoyable if a little stale, and I can have a laugh if nothing else at 2012’s atrocious The Devil Inside. Even an idea which has been done to death can have a little creativity injected into it to give it life, but The Exorcism of Anna Ecklund doesn’t even want to try. Instead, it is content to saunter sleepily from one cliché to another, checking off boxes on its Exorcist-wannabe bingo card, so play along at home if you’d like.

Possession of an innocent female victim? Check. Priest concerned he might be losing his faith? Check. Various bodily fluids being spat in people’s faces? Check. Demonic entity taunting the clergy with intimate knowledge of things they feel guilty about, specifically letting a parent die alone? Check and check. How about words appearing on the possessed girl’s skin? Check. One of the priests getting possessed when the demon leaves the girl? Check. Oh, and don’t forget the possessed girl using crude language and accusing the priests of homosexual acts. Bingo!

What so many of these films fail to understand is that the whole ‘your mother knits socks in hell’ routine was effective in The Exorcist because Regan was only twelve years old. The violent masturbation with the crucifix and use of crude language were disturbing because they represented a grotesque parody of sexual awakening in a previously innocent young girl. The same words spoken by a grown married woman are not creepy – I’ve heard family members say worse than anything that comes out of Anna Ecklund’s mouth. And it doesn’t help that we know next to nothing about what Anna was like before becoming possessed, because she starts the film in that state. The viewer has no reason to be emotionally invested in her struggle with evil, a struggle which we have seen portrayed better hundreds of times before.

The film has nothing new to offer, but it can’t even make its blatant recycling look good. Anna’s demonic makeup is bland, her bodily contortions are limp, and even her shrieking has about as much enthusiasm as any of the other sleepwalking performances on show. It relies heavily on the audience finding the mere idea of possession frightening, but doesn’t offer any real scares to jerk you awake as it drags towards its uninspired end. There’s enough nuns, crucifixes and organ music to make a lapsed Catholic edgy, but speaking as someone who has spent years working in a church (no seriously), the film felt like just another day in the office for me, right down to checking my watch every couple of minutes to see when it would be over.

Clocking in at just seventy-five minutes, at least fifteen of which were eaten up by long and boring opening and closing credits and even more by its endless padding scenes, The Exorcism of Anna Ecklund barely feels like a film at all. I had trouble recalling its plot the morning after watching it to write this review, because what little actually does happen is so forgettable. Its DVD cover boasts the old faithful excuse that it is ‘based on a true story’, but not all true stories are interesting.

Check it out if you’re in the mood for a watered-down version of The Exorcist, but it won’t put the fear of god in you.