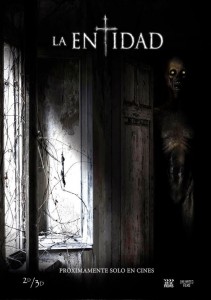 Synopsis:
A group of friends decide to venture in to the world of reaction videos for a school documentary project and come across a particularly frightening one. Determined to investigate further, they track down the original video and find themselves in a sinister battle with a mysterious being. With the clock ticking, they race to discover the truth before the Entity comes for them.

The Entity is a Peruvian addition to the found-footage horror genre and, sadly, is not a very good one. It treads an all too familiar route and hits every spooky trope along the way. Its lack of originality and inability to offer anything unique is a shame, because the film’s decision to focus on the horror of reaction videos could have been interesting. However, The Entity becomes The Ring’s inferior found-footage cousin with a terrifying lack of scares and refusal to venture in to unexplored territory.

The group of young folk we’re given to journey with are an uninspiring bunch. They spend most of the film arguing with each other, making stupid decisions – like not calling the police and breaking in to a library, rather than just waiting until the morning and entering it legally- and unrealistically filming moments where any normal person would be running for their life. Despite their devotion to “film no matter what” they don’t manage to shoot anything worth watching. Far too much of the film is concerned with the cemetery the group spend far too much time in; shots of gravestones and statues of Jesus just aren’t scary, even at night. It fails to drum up the suspense it is so eager to solicit and the dire screams of the entity – whatever or wherever it is – sound like a choking dog and are funny, rather than frightening.

The film suffers from a lot of choppy editing, made worse by the use of handheld cameras and random cuts during scenes. It never flows as it should and the shaky camera fast becomes headache-inducing and frustrating. As with most of these low-budget horror films, we never really see the supernatural entity. As with most aliens, ghosts and poltergeists, it can’t be filmed and the group are shocked to see that the moments of paranormal activity are missing from the film. Dammit, what a surprise. It would have been applaudable if the film-makers behind The Entity were brave enough to show their entity, but alas, we get little more than a shadowy blur in a fuzzy picture.

The poorly written dialogue does not make things any better and the characters feel as two-dimensional as a sheet of A4. They are not an enjoyable group to endure and as the film progresses, it becomes increasingly difficult to take them seriously. We have to suspend our disbelief far too much during the film; understanding why they never call the police and are determined to carry on with their ‘documentary’ with their friends literally falling at their feet, is just too ridiculous. The film ends on a bizarre, yet very obvious ‘twist’ which you will probably see a mile off. The explanation for the entity’s anger is another way this film trips over itself and never manages to recover. The vengeful ghost idea is over-used and unless there’s something particularly unique or surprising within the narrative, it’s going to feel like a yawn-fest. Sadly, that’s all The Entity is.

The Entity manages to squander any ounce of potential it may have almost instantly. A film like this really needs to stand on its own two feet to be successful and refrain from mimicking similar films that have come before it. Recent films like Afflicted and The Visit show that found-footage is not dead yet, it just needs a bit of a re-shuffle. This, however, is nothing more than another forgettable addition to the supernatural found-footage genre.