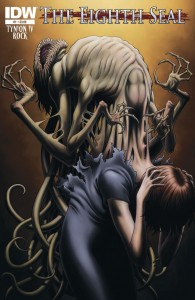 The Eighth Seal, a 5 part miniseries from IDW, is a political horror story that was originally published digitally on Thrillbent.com. Returning to print late last year, the story is centred around fictional First Lady of the United States, Amelia Greene. With growing pressure from the media, Greene begins seeing horrific visions of herself becoming a monster – visions which become increasingly realistic as the story progresses.

In the first issue of the series, Amelia is presented as a complex, fully-rounded character. One moment in particular, in which Greene examines her face in the mirror, is an interesting exploration of a woman breaking down, a woman so controlled and self-aware that she is literally forced to confront what she is becoming. However, the introduction of an Illuminati-like cult, controlling Amelia in order to take down the White House, completely undermines this moment. As a result, the series swiftly degenerates into something far less subtle and evocative, slouching predictably from page to page. By the third issue, Amelia’s hallucinations seem rote, and revelations such as a past miscarriage seem less about an opportunity for character development and more an excuse to create shocking imagery.

That’s not to say that the book is entirely without merit. The title, referencing the Seven Seals of the Book of Revelation, enables Rock to conjure up some deliciously apocalyptic images, with Amelia watching the world burn whilst crouching atop a sea of bones. The sleepwalking scene in issue two, where the blood-soaked Amelia carves the Goetic seal into her desk, is another atmospheric moment.

The book is also incredibly diverse, with the strongest and most fully-realised characters being women, queer or of colour (and occasionally both). Most of the male characters in the book – from the President himself to the Machiavellian psychiatrist – remain flat and unconvincing, adding little to the story as a whole. Though this isn’t enough to redeem the lumbering narrative, it’s still refreshing to see these types of characters represented in a genre that’s never been known for its diversity.

Overall, The Eighth Seal feels like a book of wasted opportunities. Body horror has always been most effective when exploring a character’s hidden fears and desires, examining the physical changes that take place and the lasting effect that these changes have, both for themselves and the people around them. Taking this and applying it to the First Lady of the United States is a stroke of genius, but one which, unfortunately never really pays off.