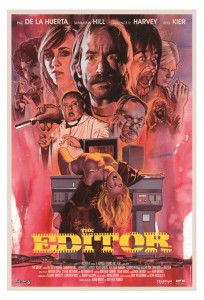 Synopsis:
Astron-6 jump back in the ring and come out punching with their riotous homage to seventies gialli and Euro-crime thrillers The Editor.

Rey Ciso ( played by director Adam Brooks) was once the world’s best ever film editor, his skill unmatched by no one else in the industry. From his top reputation he forged an extremely lucrative career from his work, bringing him fame, fortune and the love of a good woman. This was until an unfortunate accident saw Ciso lose a hand, then his money and his wife. Now back, donning a clumpy wooden prosthetic hand, Ciso attempts to kickstart his ailing career, but finds himself under increasing pressure and haunted by his past. This is not the end to Ciso’s problems however as a series of unexplained and brutal murders are occurring at the studios where he is based. Finding himself as chief suspect, in the eyes of lead detective Peter Porfiry (played by co-director Matthew Kennedy), Ciso must work to prove his innocence- that is if he is innocent, or could the cop’s hunch have some truth in it?

Tagged as a comedy-giallo The Editor came off the back of an extremely successful crowdfunding project last year. Attracting the talent of names such as Tristan Risk, Laurence R Harvey, and Udo Kier, and following up on Astron-6’s growing reputation as a force to be reckoned with on the indie scene, it seems only reasonable that The Editor would become one of the ‘must see’ titles of the year for cult film fans. The film has just premiered in the UK after doing the Stateside festival circuit over the summer, and is gathering generally positive reviews.

The Editor arrives amidst a number of new wave giallo inspired films from modern filmmakers- such as Berberian Sound Studio (2012), Yellow (2012), Amer (2009), Strange Colours of Your Bodys Tears (2013), to name a few. While those other films have mainly focused on the artistic stylings that the giallo generally uses to deliver its brutal violence in a serious way, Astron- 6  have thankfully taken another route. In allowing for a comedy remit, directors Adam Brookes and Matthew Kennedy (along with their fellow screenwriter Conor Sweeney) produce something of a celebration piece of the era- serving up their message with an ample dose of love for the period, while mixing in the best (and worst) bits of the genre and delivering them in a wonderfully spiced pastiche of all things seventies Eurocult. There is an emphasis on spoof- especially in the over the top performances, the deliberately bad dubbing, and gratuitous gore and nudity- but this all works for the greater good. This makes The Editor- alongside last year’s Discopathe- one of the few modern film projects that does encapsulate the ballsy spirit of the era successfully. This is a film obviously made by fans for fans, and it shows.

Performances across the board are spectacularly camp. Rey Ciso played by Adam Brooks- looking like a spitting image of Franco Nero complete with dodgy moustache- and Matthew Kennedy as cop Peter Porfiry ham up their parts with a certain amount of glee, creating a strong energy between them. Paz La Huerta is downright hilarious as Peter’s scorned ex-wife; her overwrought histrionics and constant reminders to Rey that losing his hand is akin to losing his manhood, is a hoot- and played out with the tongue completely in cheek. Even the bigger names, in smaller parts, all make their mark on the film- Tristan Risk as an early victim looks as glamourous as ever, The Human Centipede 2’s Laurence R Harvey gets to play a priest and looks strangely at home, and then Udo Kier appears as a psychiatrist Dr. Casini ( it would have been nice to have seen him play his part using his Flesh for Frankenstein voice, but hey you can’t have everything, and it’s Udo Kier, at least!).

Backing up the fun performances are some seriously outlandish murder scenes, bags and bags of over the top stylised violence-for which the effects are suitably gruesome- and a fantastic retro inspired score provided by the likes of Claudio Simonetti, and Giallo Disco’s Vercetti Technicolor, to really set the scene. There are also seventies Euro-cop style car chases, stunts, and plenty of crass dialogue to keep fans of all things in the worst possible taste amused. The film pays homage to a number of sources, some obvious such as The Black Belly of the Tarantula (1971), and watch out for the bonkers scene inspired by The Strange Vice of Mrs. Wardh (1971). Then there are some subtler references in there which will make fans of the sub-genre, hopefully, smile along as they discover the nods to films like Hitch-hike (1977) and The New York Ripper (1982). This is just scratching the surface, so rich is the tapestry Astron-6 create I will leave the rest for you to discover on your own.

Grandiose, lurid, obscenely camp, surreal at times, and totally OTT The Editor is a film that really packs a punch, and again proves that Astron-6 understand their fan base and know how to deliver. One to put on your radar for this year, the film is currently touring the UK festival circuit; watch out for showings in your area.