The Domestics to Hit DVD and Blu-Ray this Month 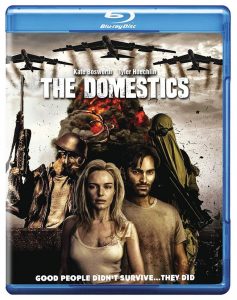 Cinedigm has confirmed that it will release the post-apocalyptic thriller The Domestics on 20th November. The film is set in a world where murderous gangs rule. Starring Kate Bosworth and Tyler Hoechlin, their characters search for solace in the quieter countryside.

It sounds like Mad Max meets West Side Story, but we’re not expecting there to be any musical numbers. Anna and the Apocalypse, this is not.

The Domestics additionally stars Lance Reddick, Sonoya Mizuno, Dana Gourrier, Thomas Francis Murphy, and David Dastmalchian. Be sure to check it out at the end of the month.