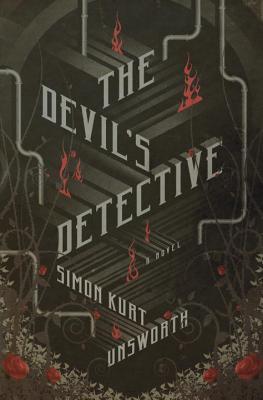 Simon Kurt Unsworth’s new dark and savage thriller, The Devils Detective is a searing vision of hell, dark and dirty, man living with demon, forever hoping for ascendancy, hard work, rife with prostitution and murder. A true land of sin, almost a free for all, with no thought for consequence.

The only form of repercussion is the Information man, Hells police and there’s only three of them to investigate the plethora of violence, murder and irreverence that is commonplace in the anguish of an everlasting depravity. If you’re looking for hope you’ve come to the wrong place. This is Hell, and sins often go unnoticed and almost always unpunished.Thomas Fool is an Information man and his life of avoiding hells interest and filing the many ‘did not investigate’ cases is about to change, he’s about to become noticed. He’s about to demand the attention of Hell and its denizens. Hell calls and Fool must answer.

Then a murder, different from all the others, one they must investigate, the Archdeacons of Hell demand it. A body subjected to a violence that has split the soul and the flesh, the soul is gone, consumed. The search is on, something old and powerful, powerful enough to eat the entire soul is on the loose. And the oldest place in hell, the home of the ancient demons bares the intense scrutiny of one man, as all around him riots to the tune of purgatory.

There is a wonderfully dark imagination and vision on show here. The world building was the highlight, ferocious and frenzied, violent and brimming with nightmarish demons from the smallest orphans to the scariest monsters wreathed in fire. Humans just existing, playthings for now but the tide is turning, it’s time for change.