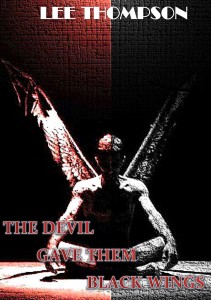 The Devil Gave Them Black Wings is a supernatural tinged thriller that resides in the aftermath of the falling twin towers.

Jacob walks a life of misery and despair, his wife lost in the disaster and he seeks closure, if it can ever be gained in the loss of a loved one, by burying her ashes at the house she grew up in. He can’t find the house though and spends his time drinking in the park, sinking into the depths of depression.

This is where he meets Nina, a thirteen year old girl who recognises the sadness in him and also the goodness, he’s broken and she needs to fix him.

‘Her heart was pounding because he looked so goddamn lost, so in need of help, but she couldn’t help him, even at thirteen she knew that no matter how much somebody else needed you, you couldn’t change a thing in their lives: you could only listen if they spoke, and you could only hold them if they leaned on you.’

At the same time a little girl goes missing from the park, an abduction and a frenzy. People search for Jacob, the authorities, his wife’s brother, Nina is desperate to see him and to warn him. Amidst the search for an abductor there’s a dark, shadowy figure with names tattooed up his arms, a guardian or something much worse, a sheer nightmare.

‘Only his features seemed to pulse, one moment blurry, the next razor sharp, then they’d blur again and for the life of him Jacob knew that if he looked away he would never be able to describe the man to anyone.’

A reporter toys with more depravity as she figures the abduction forms a pattern, a police officer looking for revenge and in the middle, one man grieving and one morally perceptive young girl deeply troubled by those around her.

‘How much grief did you have to suffer, he wondered, before your mind shattered and you couldn’t keep anything straight.’

The Devil Gave Them Black Wings is a beautifully written tale of anguish, despair and immense sadness. A story of depth that is heart rending in places, the loss of a young love, a child not yet born and if that wasn’t enough, a girl kidnapped in broad daylight. The parents distraught and burdened beyond measure with the knowledge that blame will never be far from thought.

Emotional just doesn’t seem to cover it, there is darkness in people just as there is light and Lee Thompson expresses it better than most, flips between the two in the blink of an eye and you can’t help being gripped by it all.