The Death Of April Receives a Release Date 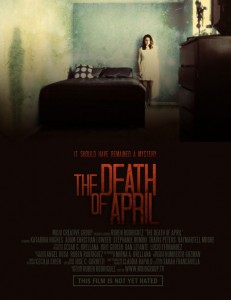 The Death of April has been waiting a couple of years for a release date and we are happy to say that the film will be released on 27th October 2015. The director is Ruben Rodriguez and he is currently working on a couple of projects including. The first is Shhh, which follows a woman suffering from post-traumatic stress disorder. However, things get worse when she ventures off for weekend away with friends and it turns in to a bloodbath. He is also working on a segment for the upcoming anthology horror Grindsploitation, along with directors Lloyd Kaufman, James Cullen Bressack, Scarlet Fry and others.

Synopsis:
Nineteen-year-old college sophomore Meagan Mullen moves into a townhouse and keeps in touch with her friends and family through a video blog. As her entries (and her life) become more complex, dark, and emotional, unexplained paranormal occurrences begin to happen in her room; and the camera captures it all. Told primarily from the point of view of an ordinary wireless webcam, The Death of April documents the unsettling activity in an otherwise average girl’s bedroom – and the mysteries that surround it.

There’s an immeasurable amount of found-footage horror out there, but The Death of April seems to be putting a refreshing twist on the aesthetic by choosing to centre on simple webcam, rather than a home filled with video cameras.

While you’re waiting for the film to be released you can have a gander at the teaser trailer below, it’s got a subtle, tense build up and delivers a nice little fright at the end.