As you may remember, Blumhouse announced last year that it was working on a remake of Andrew Fleming’s 1996 movie The Craft. We’re now learning that that film, titled The Craft: Legacy, is actually a sequel—and the official trailer even includes a nod to one of the stars of the original, Fairuza Balk. 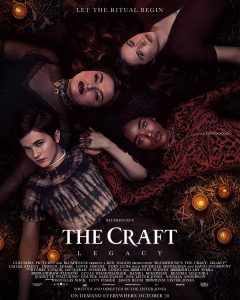 While we don’t have too many plot details yet, The Craft: Legacy will see an eclectic foursome of aspiring teenage witches getting more than they bargained for as they lean into their newfound powers. The film was written and directed by Zoe Lister-Jones and stars Cailee Spaeny (Pacific Rim: Uprising), Gideon Adlon (The Society), Lovie Simone (Greenleaf), Zoey Luna (Pose), Nicholas Galitzine (The Watcher in the Woods), Michelle Monaghan (True Detective), and David Duchovny (The X-Files).

The Craft: Legacy will release on-demand in the U.S. and Canada on October 28th, with an international theatrical release anticipated. Light a candle, summon your familiar, and watch the new trailer below!