The Corpse of Anna Fritz poster gets intimate with the dead 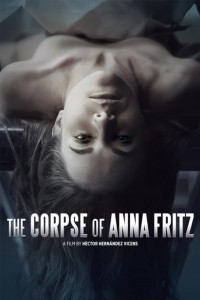 Macabre Spanish horror thriller The Corpse of Anna Fritz is available exclusively on FlixFling.com from this week, with a new poster arriving to accompany the online release.

The feature debut for director Hèctor Hernández Vicens, the film is also written by Vicens, along with first-time writer Isaac P. Creus. Premiering at last year’s SXSW festival, The Corpse of Anna Fritz went on to play at the London Film Festival and Sitges, among others. It tells a truly twisted tale of necrophilia, bros and the allure of celebrity, summarised in this synopsis:
Anna Fritz, a beautiful Spanish actress and one of the most desired women in the world, has suddenly died. Her body is transferred to a city morgue, where a withdrawn young orderly, Pau, becomes fascinated with her lifeless cadaver. When Pau sends a picture of the dead celebrity to his two friends, they show up at the morgue for a glimpse of the beautiful starlet. As the whiskey bottles and coke packets empty, the three friends decide this is an opportunity they can’t pass up to get up close and personal with the corpse of Anna Fritz. However, when they are alone with the body, they soon realise that things aren’t exactly what they seem.

This looks to be some seriously dark shit, with this trailer already showing more than some will wish to see.