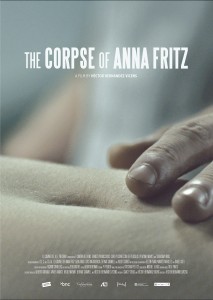 Synopsis:
Anna Fritz, a famous and beautiful actress, has died recently. Three young men sneak into the morgue to see her naked. Fascinated by her beauty, they decide to become the last people to have sex with her.

First time feature writer/director Hèctor Hernández Vicens used to write for a Muppets style kids TV show in Spain and now we find him relating a pitch-black tale of a group of youths violating a corpse. Whilst that switch in style came as quite a surprise to me, it came as an even bigger surprise to discover that his debut feature is loosely based on the real life case of a mortuary worker who violated a cadaver which awoke from a catatonic state mid-coitus.

Obviously any film that dares to dabble in this kind of subject matter is going to secure its fair share of haters and critics, but writing The Corpse of Anna Fritz off so swiftly would be a grave mistake. Whilst necrophilia is one of the world’s eternal anathemas, there have been some impressive transgressive movies which deal with the subject in a respectful manner and Hernández Vicens handles the topic dead right.

The film confidently barges its way through more than the odd taboo barrier but the debauchery never feels explicitly gratuitous. The corpse coitus scenes are certainly pretty hard to stomach but they are disturbingly engrossing and it’s clear that this film was never intended as a foundationless excuse for torture porn as, once we get past the necrophilia scenes, the audience isn’t exposed to any more particularly excessive or unwarranted violence and bloodshed. The whole thing unravels into a deftly executed little horror film and there’s a finely tuned moral compass throughout with the characters’ principles and trustworthiness put under scrutiny, much akin to The Disappearance of Alice Creed with hues of the Scream franchise.

Almost entirely shot in a hospital mortuary, the setting is surprisingly (and incredibly) effective, as is Tolo Prats’ sinister soundtrack that amplifies the sense of fear. Hernández Vicens’ choice of a more Lomographic look, to take some of the digital edge off the film, was also a very wise one as it helps create such a disturbingly authentic atmosphere all round.

Given the confined setting and bantam budget the actors’ performances were always going to be a decisive factor in the film’s clout and credibility. Hernández Vicens was obviously privy to this as his debut vehicle is fiercely character driven, so much so that the audience really ends up inside the characters’ heads as the plot thickens. All the performances are solid with Alba Ribas putting in an absolutely heart-wrenching portrayal of drop-dead gorgeous movie star, Anna Fritz. She doesn‘t even have a great deal of dialogue but there’s just something in those eyes of hers that jumps out at you and conveys each and every terrifying thought going through her mind.

If I were to nitpick, the film has a couple of scenes that didn’t completely wash with me. One particular skirmish that doesn’t end well for one character didn’t come across as violent as I think it maybe needed to given the outcome. Nevertheless, it wasn’t particularly detrimental to the film as a whole.

The Corpse of Anna Fritz is certainly as harrowing as they come, in terms of its subject matter, and won’t be everyone’s cup of tea. That said, the early necrophilia scenes are handled deftly and more than worth stomaching because the aftermath is to die for.