Synopsis:
After being flooded with anonymous death threats and hateful messages on social media, columnist and author Femke Boot (Katja Herbers) finally snaps—taking bloody her revenge on her online critics. 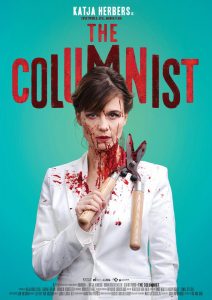 Online vitriol is nothing new, but it certainly feels like its reached critical mass in recent years, fueled in part by a U.S. president who not only encourages social media witch hunts but actively lights the torches. That’s what makes director Ivo van Aart’s Dutch horror-comedy The Columnist (De Kuthoer) feel so timely and so cathartic—because we’ve all witnessed the type of online dogpiling that Femke falls victim to.

While the film has broad appeal, some of its notes are likely to strike a particularly resonant chord with female viewers. It’s easy for Femke’s well-meaning boyfriend (Bram van der Kelen) to tell her not to read the comments, but despite being a public figure himself, it’s clear he doesn’t truly understand how much worse women can get it online and how physically unsafe it can make us feel. Femke isn’t merely being told that she’s stupid or ugly or wrong—one man writes that she should be impaled “c*nt-first” on a spike. Another says they know where she lives.

Despite the fact that Femke’s revenge against these commenters is deliciously satisfying to watch, Daan Windhorst’s script wastes no time establishing a moral grey area. Femke comes across as naively frustrated that people can’t just be nice and civil, yet she tells her daughter Anna (Claire Porro) that one of the girl’s former classmates deserved to have stones thrown at him and will probably be into child porn when he grows up. This accusation, seemingly baseless, foreshadows a tactic that Femke’s own trolls will later use against her, sending her spiralling into an even more deadly rage. All this serves to highlight one of the film’s overarching messages—that just because we can say whatever we want (and that’s ultimately a good thing), we should remember that words can have real-world consequences. 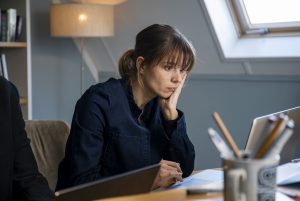 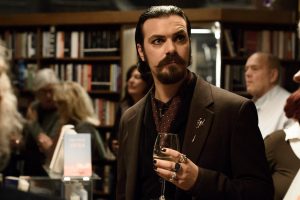 The implications of this idea are further explored by Anna advocating for freedom of speech and the right not be silenced. Femke supports her daughter’s cause, apparently not seeing the hypocrisy of permanently silencing her critics. She’s clearly lost her way—and since we’ve spent half the runtime cheering her on, we may have, too.

The film arguably takes this one step too far, causing Femke to lose all sympathy with her final murder. Still, the level of nuance the script brings to the table is admirable. Some suspension of disbelief is required (the fact that she is never suspected of the murders suggests the Dutch police are sleeping on the job, given how much evidence she seems to leave behind) and you’ll see the third act “twist” coming a mile away. But overall, The Columnist is a beautifully shot and solidly performed piece of social commentary that, while not as biting as it could be, still leaves an impression.