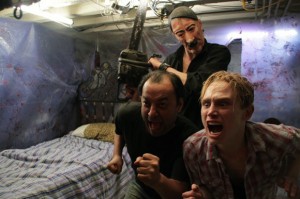 Synopsis:
Stanley Farmer loves horror movies, but despite his relentless attempts to get on board the Hollywood gravy train, his efforts are continually rejected. After years of the perpetual cold shoulder, his frustration now manifests itself into sociopathic tendencies which see him drive forward with an all new horror project that blurs the lines between fantasy and reality.

With a transatlantic name change from Do You Like My Basement, Roger Sewhcomar’s independent horror that he wrote, produced and directed joins similar contemporary features like Behind the Mask: The Rise of Leslie Vernon (Scott Glosserman, 2006) and The Hills Run Red (Dave Parker, 2009) that give us a voyeuristic look into the life of a serial killer. Hailing from London, Sewhcomar has been a resident of the US for nearly 30 years and cut his teeth in a plethora of technical roles for other productions. For this, his feature length debut he successfully turned to Kickstarter to raise the $5,000 budget, then utilised his own basement in Harlem to ensure a frugal shoot.

As the camera skirts around our lead during the main credits sequence, playfully avoiding a full close-up of our protagonist Stanley, we’re left to digest a grimy introduction to this sleaze-pit of a basement as he prepares to audition cast members for his “reality-style horror film”. Indeed, as Stanley welcomes Chad (Devon Talbott), his first interviewee, it’s clear that Sewhcomar is keen to adopt a similar POV shooting style that proved so successful in Franck Khalfoun’s Maniac (2012) for example. It’s a bold ploy that’s lost an element of its originality of late, and with a lead actor as camera-ready as Charlie Floyd it could be considered frivolous – but in actual fact it does succeed in lending a degree of menace to Stanley which through more traditional direction may have been less impactful.

The hopeful amateur actors continue to file in as the film progresses and we get treated to some retro split-screen as well as a lusciously lit basement that oozes a gorgeous sanguine glow. From its raw, disorientating soundtrack through to the scuzzy tarpaulin lined walls smeared with blood, a single figure crew has managed to give The Cellar a genuine Grindhouse vibe of leery repulsion. With subtle make-up from Brian Spears (The Inkeepers, The Sacrament, We Are What We Are), the film doesn’t find itself drenched in blood – instead the final third builds into a tense three-hander peppered with dark humour.

The pacing of The Cellar’s series of auditions may well frustrate those who expect their horror to be a frenetic series of jump cuts and ear-piercing jolts; if you’re content with a slow build, however, that creates a window into the mind of a disturbed soul, then there is a lot to like. I’m not going to mention that 1986 piece of brilliance by John McNaughton as The Cellar is far from achieving those heights. For its minimal budget and sparse locations though, while not in the same street – it’s certainly filled with aspirations of moving into the neighbourhood.