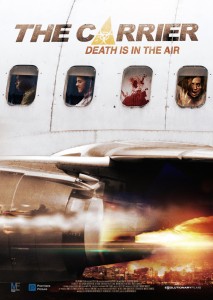 Synopsis:
Not far in the future, a plague which is resistant to antibiotics has virtually wiped out the population of earth.  The only safe place is in a plane.  One such plane flying over northern Europe carries a group of passengers desperate to stay airborne for as long as possible.  However, with fuel running low, and several of their number having somehow become infected by the deadly virus, it is only a matter of time before they will have to land the plane and face the terrors that await them on the ground.

Seldom is a film as well suited to its setting than the new sci-fi drama The Carrier.  Indeed this British action film – directed by Anthony Woodley (who’s previously acted as an ariel technician on the recent Bond films Casino Royale and Spectre), and written by him along with Luke Healy, Helen Kingston and Stefan Mitchell – plays out much like a plane journey, which is appropriate considering where most of it is set.  After an initially tense introduction (take-off), the film gathers altitude with a few bumpy shocks along the way, before settling down to cruise along nicely, whilst hitting the occasional shock burst of turbulence.  Indeed by the end of its ninety minute flight time, one cant help but feel that watching the film has been like most flights – you anticipate the worst but in the end, apart from the occasional hiccup, not much actually happens.

The truth is that The Carrier is more than competently made and, for the most part, reasonably engaging.  However, with the majority of the story happening within the cabin confines of a standard long-haul 747, and the limited area surrounding the plane when it is forced to make an emergency landing at an isolated aerodrome, the result has all the air of a small, albeit superior, television drama, as opposed to a large and glossy film production.  Indeed many of the production’s elements have the feeling of a made for TV programme.  The storyline and dialogue, though suitably tense at the right moments, none-the-less lacks the conviction to make it seem real, whilst the cast given the job of bringing it alive onscreen – including Jack Gordon, Edmund Kingsley and Josie Taylor, who are probably better known for their roles in television shows like Eastenders, Stonehearst Asylum and Midsomer Murders – seem to lack the presence required for film roles.

As with many films which have a limited budget – which The Carrier clearly does – the production values vary wildly.  The interior of the 747 where a lot of the action plays out is suitably authentic, though admittedly you can’t go far wrong with the inside of a plane.  Equally well, though confined to a limited area within the vicinity of the plane, the airdrome where the climatic scenes take place are also believable looking, having been clearly shot on a real location.  Where the film stumbles however is with the exterior shots of the plane in flight.  Clearly having superimposed shots of a plane over a background of clouds and open sky, simply gives the whole thing a cartoon-like quality which detracts from the otherwise reasonable quality of the production.

What, if anything, you could ask, justifies this film to be discussed within the field of horror?  The zombie like make-up of the characters who get infected by the deadly virus is surprisingly well done and realistic enough to make you feel queasy.  The storyline also includes the opportunity for several graphic moments, definitely not suited for those squeamish with body horror: one particular scene near the beginning gives the idea of DIY surgery a whole new slant.

In the end, though there is nothing wrong with The Carrier, it has all the feel of an inflight movie and something you’d probably only watch to pass the time.  Mind you, considering its subject matter, it’d probably not be the kind of film to watch on a plane journey.

Adding some background interest to the main film, the DVD’s extras include a making of feature and a look at the film’s visual effects, as well as the obligatory deleted scenes and trailer.