THE BRAINS OF RATS: Book Review 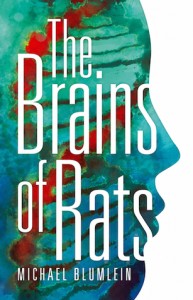 The Brains of Rats by Michael Blumlein was originally released in 1989 and then re-released by Valancourt books with an introduction by Michael McDowell in May 2015. The author uses his medical background to stunning effect in twelve stories that certainly give pause for thought, chilling in its entirety, intelligent and horrifically memorable.

The second story the politically charged ‘Tissue Ablation and Variant Regeneration: A Case Report’ describes in absolutely chilling and impersonal detail a surgeon’s evisceration of President Ronald Reagan. This story incorporates a barrage of medical terminology, clinical and cold blooded, there’s an absence of feeling, detachment even but if there’s one story I will remember for years to come, it’s this one.

In ‘Bestseller,’ a struggling novelist unable to sell his books, receives terrible news when his son is diagnosed with cancer and out of the blue he is presented with an opportunity to arrest their bad fortune. He must sell something else unthinkably horrific and from the first there is no end, almost like an addiction “What greater act of creation than to create ourselves”.

The ‘Wetsuit’ tells of a family recovering from loss, victimized by her husband’s eccentricity, his brutal singularity, Cam’s Mother always assumed he knew of his Father’s ways of coping with the stress and strains of life. Cam is shocked at the discovery of what his Father did and starts his own journey of discovery with an intense need to understand “One lie, one secret like that makes you wonder if everything else didn’t have some other meaning to it. It makes you doubt your own life”.

Valancourt Books is an independent small press specializing in the rediscovery of rare, neglected, and out-of-print fiction.  Founded in 2005 to restore many of these works to new generations of readers and primarily focused on Gothic, horror, and supernatural fiction encompassing both 18th and 19th century classics and more modern works.