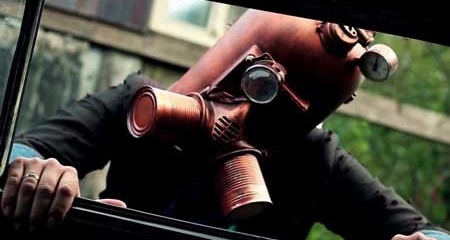 Synopsis:
Onus meets the Texas Chainsaw Massacre in a twisted game of kill or be killed.

Unfortunately the synopsis (which was taken from IMDB) doesn’t help in understanding what the film is all about. I am guessing that Onus refers to the next film to be released from George Clarke, who is the writer / director of The Blood Harvest. However, as with the reference to the Texas Chainsaw Massacre? Well I am not entirely convinced.

The film focuses on a set of grisly unexplained killings, which were taking place within the City of Belfast and its surrounding rural areas. Top Detective Jack Chaplain (Robert Render) who if he was a genuine police officer probably couldn’t detect his butt hole, came up with a theory that it was the work of the supernatural and was most likely to be those Vampires. Ridiculed by his boss, he was subsequently fired leaving his partner Hatcher (Jean-Paul Van der Velde) to carry on with the investigations. Not one to give up, Chaplain went rogue and continued to work on his theories.

Now the killings, although not that spectacular are a little bit on the weird side. In as much that the preferred method is to pluck out the eyes of a victim with a fork and then eat them. That particular method took an absolute lifetime from the build up of the scene, to the prolonged forking and then the eating. One of the killers, played by Alan Crawford, wore this bizarre head contraption, which appeared to be a welding helmet decorated with empty cans of baked beans. This strange, almost Steam Punk headgear was teamed with a childlike rocket T-Shirt. I couldn’t quite fathom what was going on with his face. I felt like the look was supposed to be somewhat inbred as in The Wrong Turn, but regrettably, he looked more like he was having a deep, painful rectal examination throughout the entire film (not a good look)

The film made no sense until it all became clear in the last 10 minutes. There was a neat little twist but it is only until the end that we truly get to understand the killers and their motives.

The Blood Harvest is an independent film with distribution under Yellow Fever Productions, this being the company, which Clarke founded. Having such a relatively low budget for a feature film – approximately £10,000  – it is hardly surprising that the production value and the overall quality is a little bit lacking. Although, allowances should be made because of the costing, there are some things that can’t be excused. What I did not like was the fact that there were a few fade to blacks that lasted for about 10 seconds each time. This served no purpose, other than maybe to pad out the film by another minute or so.

I found that the pace of the film picked up within the last 45 minutes but until then I felt quite disengaged with the story and with the characters. The acting was a little bit stilted and disjointed at times. I wasn’t entirely convinced that people were in genuine fear for their lives. Likewise, I didn’t find the killers particularly terrifying, especially with rectal man. One person of note in the film is Matt McCeary, who apparently appeared on Britains Got Talent. This would be his first job into acting and he didn’t do a bad job.

With so many negatives it became difficult for me to truly enjoy The Blood Harvest. I also wasn’t particularly enamoured with the fake Grindhouse look which kept happening at various time. Watch it to support Independent Films but don’t hold out for it to be something amazing.